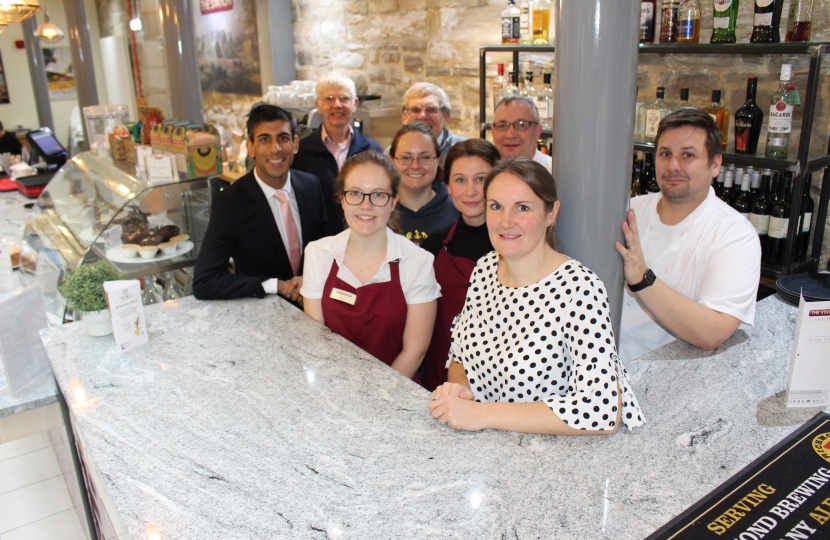 The re-launched café at Richmond Station has got off to a flying start.

In its first full month of trading, The Station Café Bar did more than twice the amount of business it expected to. Among the customers was Rishi Sunak, MP for Richmond, who enjoyed a quick lunch during a busy day of engagements in the town.

After meeting the new team running the re-modelled and equiped café, Mr Sunak said: “The Station has always been a favoured spot to bring my family so it is great to see the café up and running again and so successfully. The new layout is much better and my lunch was excellent so I can understand why the customers have given the venue a vote of confidence. It is once again the beating heart of The Station.”

The café fully re-opened at the end of September and is now managed by RBPT Enterprises which is wholly owned by  the Richmondshire Buildings Preservation Trust, the body that looks after and runs The Station complex.

Previously, the café was run by tenants but their lease was terminated earlier this year. Since then, the serving point and eating areas have been re-shaped and the kitchen re-equipped.

It is now run by Gareth Bottomley, formerly executive chef at the renowned Charles Bathurst Inn at Arkengathdale, with his wife, Emma, running the front of house operation.

James Gravenor, the Richmondshire Buildings Preservation Trust director of finance, said he was delighted with the way the café had performed in its first few weeks.

He said: “Along with the other trustees, I’d like to thank Gareth, Emma and their new team for a making such a great start. The café is once again what we wanted it to be with an emphasis on using local ingredients and suppliers.”

The Station Café Bar is now open every day 9am – 11pm. See www.thestation.co.uk/cafebar for menus.