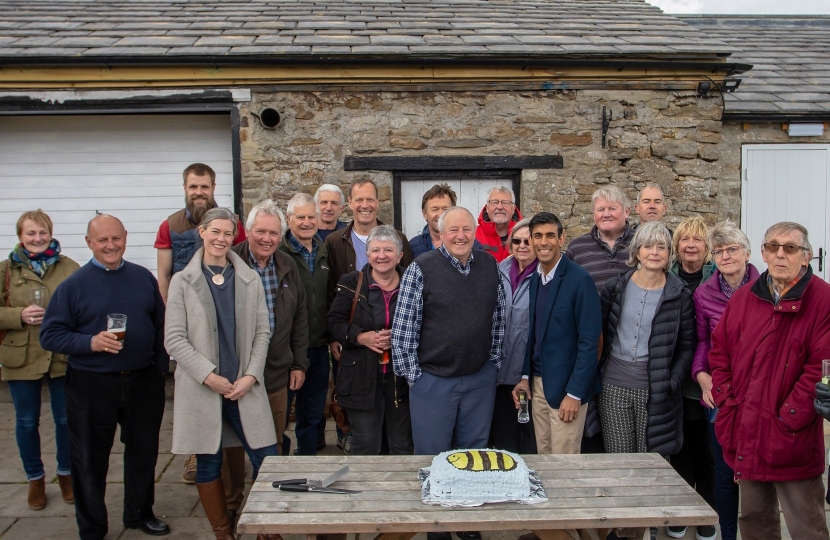 A successful, nationally-recognised pub has opened three new developments to help it serve the community even better.

The George and Dragon at Hudswell, near Richmond, held a ‘Bees, Trees and Wees’ event with Rishi Sunak MP to mark the expansion of its bee colonies, the creation of a small wood and the building of new, fully accessible toilets.

The developments have been led by the directors of Hudswell Community Pub Ltd (HCP) who own the pub and associated land.  HCP is a co-operative, a community benefit society with 200 members, including Lord Hague, Mr Sunak’s MP predecessor, who opened the community pub in 2010.

The pub has been run by Stuart and Melissa Miller, for the last five years.  During that time it has been voted Pub of Year by CAMRA, nationally in 2016 and most recently, in Yorkshire in 2017 and 2018.

Mr Sunak, who formally opened the new developments, said: “The George and Dragon has been phenomenally successful and it is so commendable that the pub’s community owners have not rested on their laurels but have continued to find ways to make it even better.

“The Hudswell pub project has been and continues to be pioneering and shows the way for the community pub sector which I am pleased to say is thriving both here in North Yorkshire but also nationally.”

Martin Booth, the secretary of the Hudswell Community Pub said the directors and members of HCP were very proud to be able to offer much better access to the George and Dragon for wheelchairs.  Access had been improved via a level route to the pub’s rear door provided. On the patio area, some unsightly old outbuildings had been demolished and a new accessibility toilet constructed.

“It’s very important to HCP that, as a community pub, everyone should be able to use our facilities,” said Mr Booth.  “The patio has also been extended providing additional outside space from which to enjoy wonderful views across Swaledale.”

He said the pub’s apiary had been expanded and re located just below the community allotments.  The bees produce Hudswell Honey for sale in the pub’s Little Shop and they also pollinate the plants on the allotments and more widely.

Access to the pub from Hudswell Woods had been improved by re-routing a path to avoid the bee hives and a badger set. The new paths now skirts a newly planted wood where 200 saplings have been planted.  The wood will be coppiced in the future and used for making garden implements and possibly charcoal.

Paul Cullen, chair of HCP, thanked Just the Job Environmental Enterprises in Richmond for help in clearing the land, to the Yorkshire Dales National Park Sustainable Development Fund for grant aid support and also the Woodland Trust for financial and technical help.