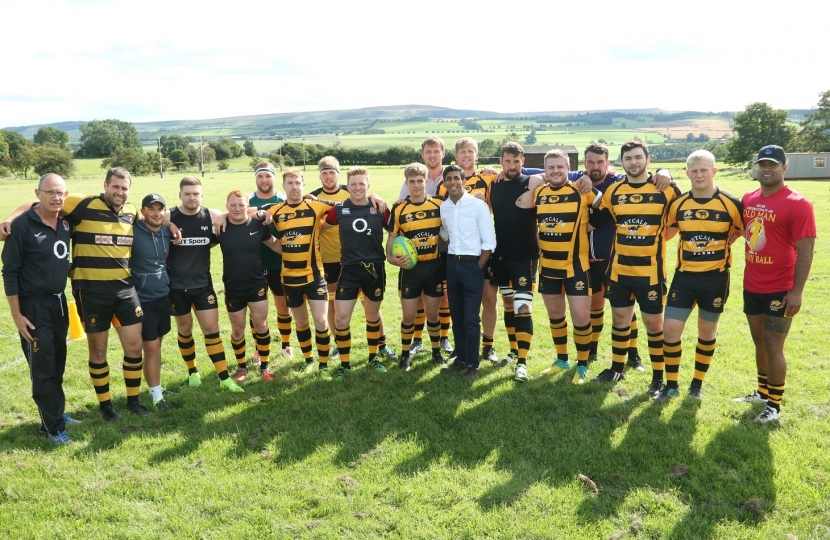 The Richmond MP was among the guests at the official opening of new facilities at Wensleydale Rugby Club in Leyburn.

In recent years the club has modernised and upgraded the clubhouse and changing facilities at a cost of £550,000.

Off-field success has been matched on field where the club’s first team has risen through the leagues from Yorkshire 5 to Yorkshire 2.

Mr Sunak, who has been a supporter of the club since becoming the area’s MP in 2015 said it had inspirational to watch the club develop during his visits to see progress.

After opening the new clubhouse at Cawkill Park, he said: “It has been a pleasure and privilege to be invited to play a part in the club’s celebrations. The commitment of all involved to make this happen has been admirable.”

Grants aid from RFU, Sport England, the Elm House Trust and Richmondshire District Council assited in a two-phase development programme. A total of six changing rooms have been built along with an official’s room, and training facilities. The extended clubroom and bar, catering facilities and new toilets are available for community use and can accommodate up to 200 guests.

The club’s vice-chairman, Chris Taylor, said: “We have only been able to do all this with the help of many grants and the loyalty of our members.

“The next phase will be to create a viewing balcony and to re-lay some of the pitches.”

Mr Sunak was assisted at the opening by one of the club’s founders, Jim Hawkins, the club’s youngest member, Phoebe Armstrong, aged six, and former England and British Lions winger Peter Squires.

Mr Hawkins and other club officials thanked their supporters and all enjoyed a meal together.

The day was made complete with a win over Ripon by 37-18.

Currently they have nine junior and two adult teams; anyone interested in playing or coaching should contact Jim McRobert on 07801 564020 or see www.pitchero.com/clubs/wensleydalerufc/.