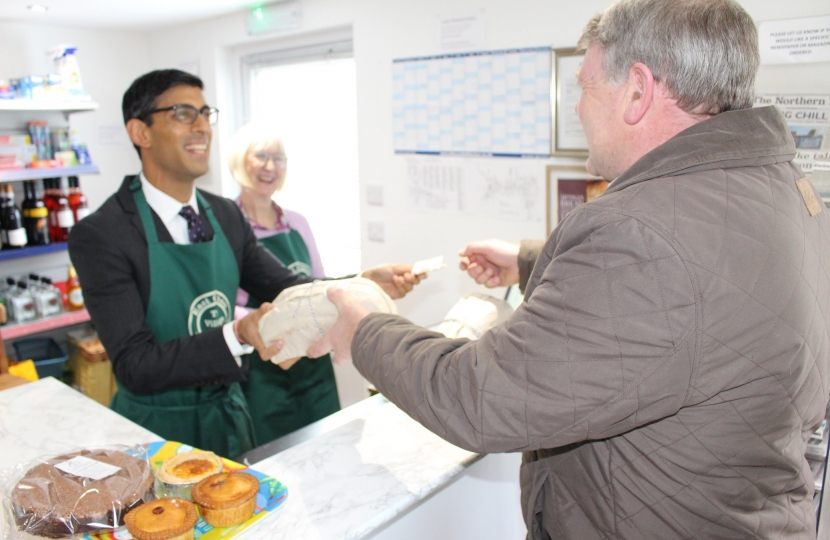 A new village shop has become a hub for its community after a successful first year in business.

After visiting the store in East Cowton, near Northallerton, Richmond MP Rishi Sunak has praised the commitment of the villagers and volunteers who have made it such a success.

East Cowton Community Shop opened in December 2017 after residents banded together to ensure their village retained a shop.

The old store and post office had closed the same year. But East Cowton Community Enterprise Ltd was quickly formed to raise funds and establish a replacement.

A group of 78 investors raised just over £35,000 to purchase a building and have it sited on land next to the village hall.

The shop is now open daily, run by volunteers, with a pop-up café taking place in the adjacent village hall on Friday afternoons when the mobile Post Office calls.

When Mr Sunak called at the shop on a recent Friday, villagers were combining making purchases with a trip to the café and post office.

He said: “Putting the shop here has been the catalyst for a regular community gathering, helping to sustain both enterprises and really bringing villagers together.

“The shop investors and volunteers have done an amazing job and demonstrate what a group of committed people in a community can do.”

Mr Sunak said he was most impressed by the range on offer and the efforts made to stock locally-produced goods where possible.

The village’s Hambleton District councillor Stephen Watson is a leading member of the community enterprise and helped secure an £8,000 grant for the project from the council’s "Making a Difference Fund".

He said: “The shop has done so well in its first year and we are now in a position to potentially repay half of the original investment plus a three per cent dividend.

“What’s most gratifying is the way the villagers have rallied to the cause and backed their community to deliver a great social hub.”

Cllr Watson said the pop-up café run by Linda Bainbridge on the Friday afternoons was attracting a regular crowd of villagers and was raising money for a project to build a replacement village hall. The long-term ambition is to combine the hall and shop to give an even greater range of services.

I was pleased to pay tribute to the volunteer groups in North Yorkshire who have provided help to the vulnerable and isolated during the Covid 19 pandemic.