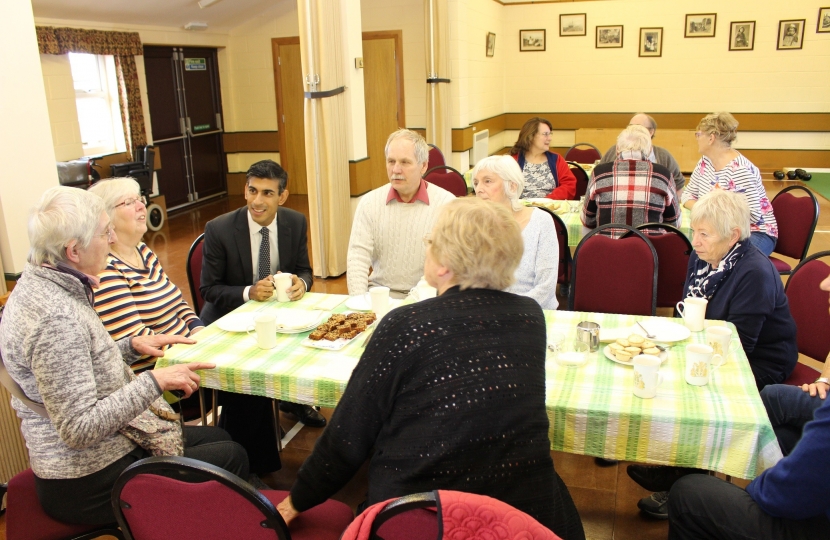 Richmond MP Rishi Sunak dropped in at a village coffee morning established to bring people together and help combat loneliness.

Mr Sunak visited the Welbury Coffee Morning in the village near Northallerton which was started just three months ago to help develop community spirit.

The MP spent an hour at the village hall chatting to about 20, mainly elderly visitors, and also tried his hand at indoor bowls.

Organiser Elizabeth Robson said the coffee morning, which also offers a book/magazine swop stall, was a joint project between the village hall committee and the local Women’s Institute.

She said: “We wanted to put on an event that would bring people together and foster community spirit. Most of those attend are older people but we also want to attract younger people, particularly young mums who we know can become quite isolated.”

Mrs Robson said the cost of putting on refreshments was covered by donations.

Mr Sunak, the Minister for Local Government, is a member of the Government’s cross-departmental team set up to tackle loneliness announced by the Prime Minister last month.

He praised the Welbury initiative and said it was excellent example of the community activity which the Government would be encouraging through its loneliness strategy.

He said: “The Prime Minister set out clearly last month the Government’s commitment to tackling loneliness – which is becoming one of the greatest public health challenges of our time.

“Along with my colleagues from nine Government departments I will be working to help build a better connected society. The strategy to lessen social isolation is backed by extra resources and the money - £20m - will be used to foster many more community and charitable initiatives like the one I visited at Welbury.”

More information about the monthly Welbury coffee morning can be obtained from Mrs Robson on 01609 882804.