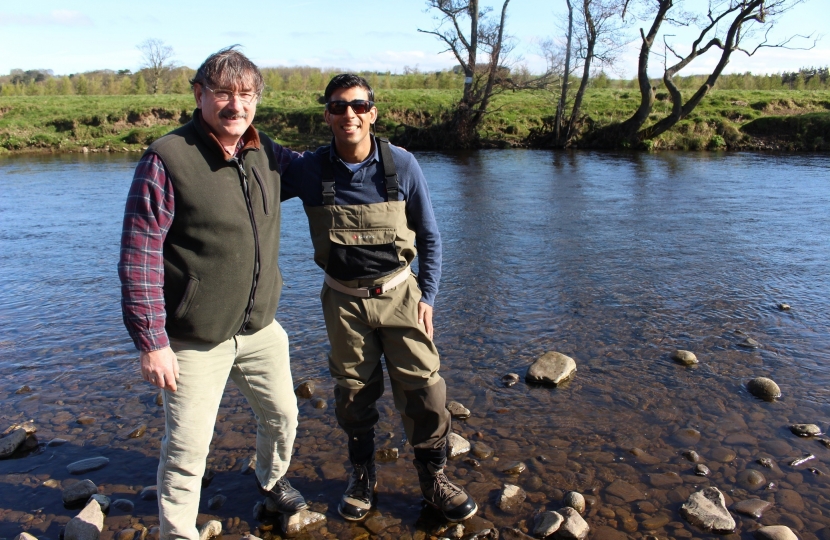 Environment chiefs have agreed to Rishi Sunak’s call to extend the salmon fishing season on the River Ure.

The Environment Agency will start the process of changing the season when salmon can be caught in the river so it starts in February rather April.

The move has been welcomed as a significant boost to the tourism industry in Wensleydale during a traditionally-quiet time of the year for visitors.

The Richmond MP wrote to the chairman of the agency, Sir James Bevan, saying the increasing numbers of salmon returning to the river was an environmental success story the agency and its partner landowners and conservationists should be proud of.

He urged him to extend the season to take advantage of the recovering salmon population, to attract more fishing enthusiasts and the economic benefit they would bring to the area.

Sir James also agreed to the MP’s request to upgrade the Ure’s status to that of a recovering salmon river – an important step towards Principal Salmon status which attracts future conservation and protection measures.

An Environment Agency spokesman said a consultation would be launched shortly on changes to the bye-law governing the season with a view to the change taking effect in 2019.

Mr Sunak said: “This is fantastic news for the Yorkshire fishing community, many of whom disappear to Scotland during February and March, and the pubs, restaurants and hotels who will benefit from looking after them in Wensleydale.”

Mr Sunak paid tribute to the work of the Ure Salmon Group and the Yorkshire Dales Rivers Trust for their work in highlighting the issue and improving the river environment.

The Environment Agency’s move was welcomed by Philip Ellis, a fishing guide and member of the Ure Salmon Group.

He said: “The decision is vindication for the work that everyone has put in to restore the health of the river and the Ure season will now fall into line with other salmon rivers in Cumbria and Northumberland.”

Mr Ellis said the season extension would not harm the recovering stocks because any salmon caught before June 16 had to be returned to the river.

The news was also welcomed by Paul Klein, proprietor of the award-winning Blue Lion pub and restaurant with accommodation at East Witton, near Leyburn.

The pub offers salmon fishing packages from April, the current start of the season.

Mr Klein said: “This is really very important for tourism businesses round here. February and March are two of our quieter months so the potential for increasing business then is tremendous.

“Starting the season at the beginning of February would dovetail neatly with the end of the shooting season on January 31.”

The River Ure was once one of the best salmon rivers in the UK but stocks dwindled in the middle of the last century because of pollution down river in the Ouse and Humber caused by heavy industry in West Yorkshire.

Improvements in water quality and the removal of physical barriers to salmon returning to their traditional spawning grounds in the upper reaches of Yorkshire’s river have seen a dramatic recovery, particularly in the Ure.

Mr Sunak said he was also supporting the Yorkshire Dales Rivers Trust’s efforts to improve salmon stocks in the River Swale. The trust is working with the Environment Agency on a plan to build a more effective fish pass at Topcliffe Weir to open up 44km of the Swale to Richmond Falls.