Rishi Sunak on the spot in The George Podcast 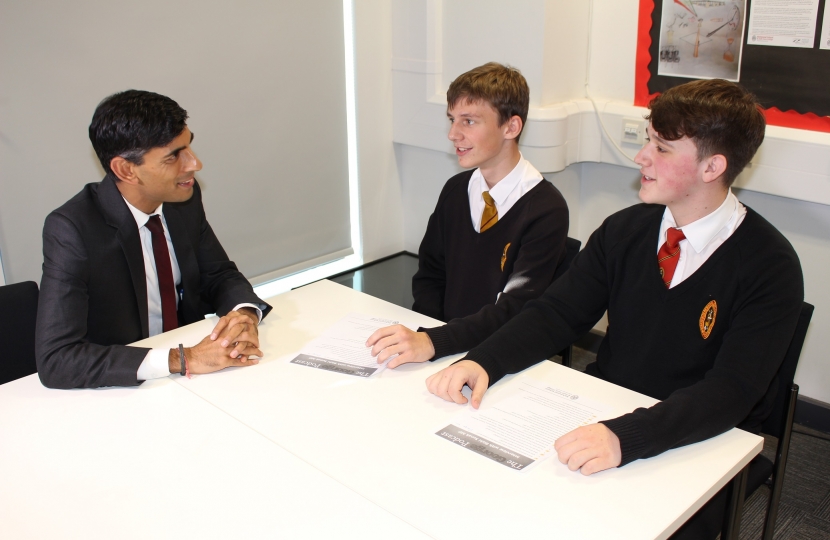 The two Georges, George Harris and George Whyatt, Year 11 and Year 10 students at Richmond School and Sixth Form College, were delighted when Mr Sunak accepted their invitation to take part in their Podcast.

‘The George Podcast’ was created by the two students who both have an interest in journalism and media.

Avid podcast fans, they decided this would be the right platform to engage and enthuse other students in school.

Producing a mix of content that is useful and informative, as well as providing elements of humour, the two Georges aim to motivate and inspire with a variety of interviews, from students and alumni to invited guests, covering a range of different subjects and career pathways.

Rishi said: "The two Georges had a great set of questions which they put to me with commendable assurance.

“Only last week I did a podcast with BBC Politics' Nick Robinson and these questions were just as challenging. Some of them were very searching and others more light-hearted. I'm really looking forward to hearing the finished podcast.”

George Whyatt said: “I decided to set up my own podcast because I have always wanted to film videos and I am also hoping to be a journalist when I am older so thought it was great way to combine the two.

“We chose Rishi Sunak because from what we have heard and read he is very interesting and has a lot to talk about. I also wanted to find out some information I thought would be interesting for people to hear.”

George Harris added: “I wanted to start a podcast because I have listened to them for ages. However, I wasn’t sure who to do it with until George said he would like to do it as well. I thought it was a great idea because we have known each other for years, have similar interests and both have the same name.”

The students posed a great mix of questions to find out what makes Rishi tick, on both a professional and a personal level. They discovered that one of the most-important life lessons he learned was independence, along with resilience and creativity which are three of Richmond School’s values.  He also encouraged the students to make the most of every opportunity, to soak them up and do as much as they can.

When asked what advice he would give to anyone wanting to enter the world of politics, Rishi said that he hoped there are some budding politicians in school.

His advice was threefold: to do something else first to have other experience to draw on, to have a thick skin and to really enjoy meeting people.

On a lighter note, it was interesting to find out that Star Wars is Rishi’s favourite film, he prefers Coca-Cola to Pepsi and he would have loved to have met Roald Dahl and William Wilberforce.

When asked why he loves Richmond, Rishi responded: “It’s probably not the mainstream answer but I do love the food in Richmond!  I love having breakfast at the Station, Mocha is brilliant for their amazing chocolates, tea and cake and then pork and apple pie for lunch from Taylor’s.”

Jenna Potter, Headteacher, said: “Our school values mean so much to us and it is brilliant to see how important they have been in Rishi’s life too and led to such success. I am very impressed at the way the boys have conceived this project and led it to such a positive outcome.  Well done George and George!”

The full interview with Rishi can be watched at https://www.youtube.com/watch?v=NOaATA2Juk4

Rishi concluded the interview by saying: “Nick Robinson, eat your heart out!”