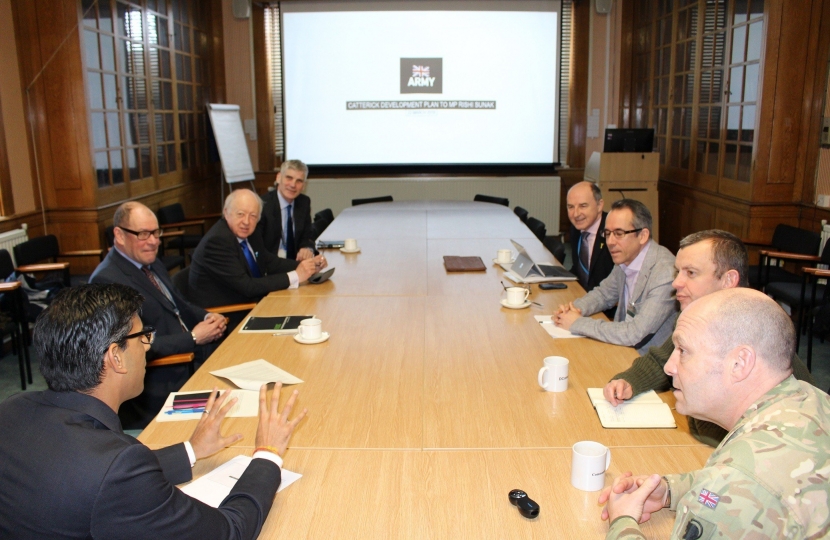 Catterick Garrison’s MP Rishi Sunak has written to the Defence Secretary urging him to unblock delays in the planning for the expansion of Britain’s biggest army base.

The base has been earmarked to be a “super-garrison” with a number of British Army units moving there as other Army bases around the country are closed.

The Army 2020 Refine project will see numbers of military personnel based at Catterick increase to around 8,400 by 2030 from the 5,700 currently there.

Their dependents will mean an additional 5,700 wives, partners and children and by 2032 Catterick Garrison will be the third-biggest community in North Yorkshire. Only Harrogate and Scaborough will be bigger.

Mr Sunak, the MP for Richmond (Yorks), said a great deal of work had already been done locally on planning for the expansion, with new education and health facilities, and housing being discussed.

But he was concerned about delays in the commissioning by the Ministry of Defence of an important assessment study into the full impact of the expansion.

In his letter to Gavin Williamson, the Secretary of State for Defence, the MP writes: “The development is very much welcomed in the constituency which is immensely proud of the longstanding military presence of the British Army here. The growth of Catterick Garrison offers a chance to build further on those historical associations and grow the local economy.

“However, the local civilian population does also have some understandable concerns about the infrastructure being in place in time to cope with the influx of servicemen and women, and their families.”

Mr Sunak said the issue had been raised with him at the recent Richmond (Yorks) constituency committee of North Yorkshire County Council which he had attended.

He added: “I understand that later this year the Ministry of Defence is to make an announcement about the exact numbers of military personnel, the specific units and the detailed timescales.

“This will be very much welcomed by all concerned in the local area but the detailed planning for this cannot take place before the completion of the Assessment Study. I very much trust we can move on this important step sooner rather than later.”

He concluded his letter: “I believe bringing many more units of the British Army to Catterick Garrison is a tremendous opportunity for both the military and the civilian populations. But I am sure you will agree that it is essential that the period in which the supporting infrastructure has to be developed to cater for a rapidly-growing population is not squeezed.

“It would obviously cause significant local issues for both the civilian and military communities if the Garrison expands without the appropriate support structures in place.”

A multi-agency strategic group lead by the Ministry of Defence and involving the local authorities has been working on a masterplan for the Garrison. Existing primary schools have already expanded and a new primary school – called Cambrai Community Primary School – will open on the former Darlington College site in September 2019, initially with nursery and reception classes.

Government has provided the funds to develop the business case for a new health centre and to increase resources within Richmondshire District Council’s planning team.

Work is also taking place on assessing the local road network and its capacity, taking into account the recent opening of the upgraded A1 and the new Catterick junction.