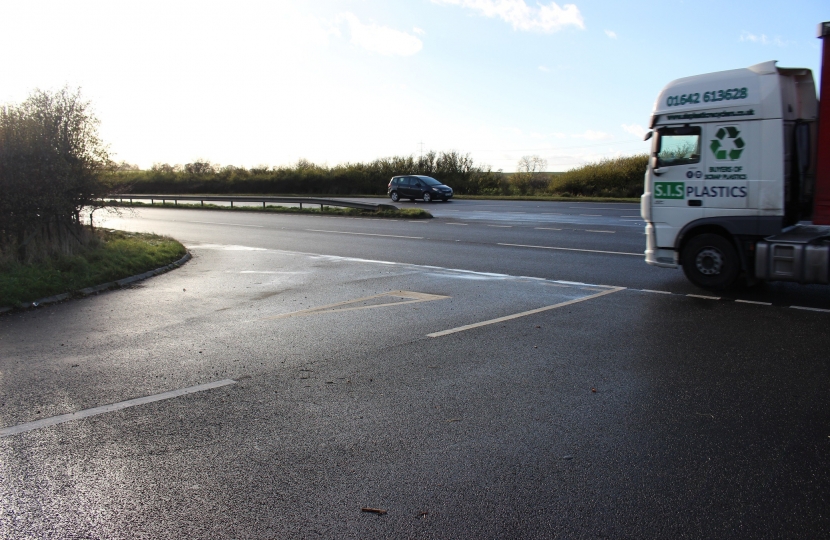 Up to 17 gaps in the central reservation of the A19 in North Yorkshire could be closed, according to a safety study called for by two MPs.

The gaps in the busy dual carriageway between Dishforth, near Thirsk, and Crathorne, near Yarm, have been identified in a Highways England (HE) report drawn up following pressure from Rishi Sunak, MP for Richmond, and Kevin Hollinrake, MP for Thirsk and Malton.

The report was commissioned in December last year after an inquest into the death of a pensioner who died when a van crossed from one carriageway to another through a central reservation gap and hit her car head-on.

The two MPs and the Coroner who held the inquest joined with the family of the woman who died – 83-year-old Sonia Rose, of Carlton Miniott, near Thirsk – to demand safety improvements.

Highways England have agreed to close the gap where Mrs Rose died – Stony Lane, south of the Cleveland Tontine, near Osmotherley – and embarked on a major study of all the gaps on the road between the junction with the A1(M) in North Yorkshire and the Tyne Tunnel.

Senior HE officials updated the MPs, Mrs Rose’s daughter, Katy, and her brother John on progress with the review and the proposed safety improvements.

Ben Dobson of HE’s operations directorate said that the A19 in North Yorkshire had three times more gaps than a typical dual carriageway road and the stretch between Crathorne and South Kilvington had the most serious accidents in recent years.

The HE report had identified 17 gaps where the optimal solution was closure and another 39 where safety improvements, including better road markings, improved fencing terminals and signage would be appropriate.

Mr Dobson said any closure proposal would be subject to funding being found. There would also be consultation with local users and communities, as was currently the case with the gap at Stony Lane.

Work would continue on accident analysis of all the gaps to prioritise the improvements, he said. He was confident closure work would be completed at Stony Lane in the current financial year, subject to the successful conclusion of the consultation process.

Work was also ongoing on the scheme for the nearby Mount Grace Priory gap which is to be closed before the opening of a new visitor centre at the English Heritage attraction. Safer barrier ends had already been installed there.

Mr Hollinrake, the MP for the Thirsk and Malton constituency in which the late Mrs Rose lived, welcomed the report.

He said:: “I’m pleased that Highways England has carried out this study and the results certainly show that, subject to funding and consultation, there are a number of actions which could be taken to improve safety.

“I’m delighted to be able to represent the family of the victim of this terrible tragedy and applaud their efforts to prevent another similar incident. It’s important we do everything we can to make sure the road is as safe as possible.”

Mr Sunak, the MP in whose Richmond constituency the fatal accident happened, said the study showed the significant improvements could be made to the road’s safety.

“Highways England have responded positively to our concerns and I welcome the results of the study.

“But we have seen with the plans for Stony Lane and Mount Grace Priory that where alternative access options are available, gaps can be closed and safety improved.”

Mr Sunak said he and his Parliamentary colleague would press for the funding necessary to complete the improvements to the road.

Mrs Katy Rose said: “It is good to hear some positive news about progress on this very important issue.”