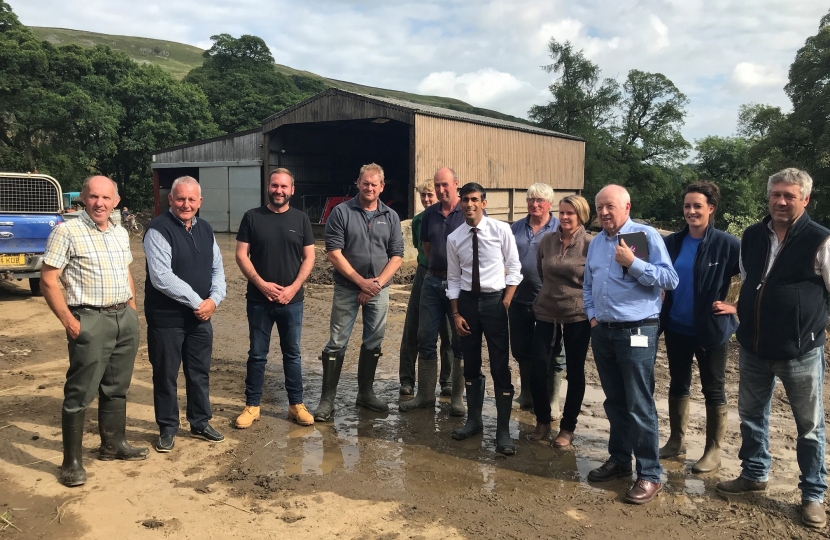 Rishi Sunak MP has welcomed the Rural Payments Agency’s response to his request for flexibility for farmers hit by July’s devastating floods in the Yorkshire Dales.

The agency has issued guidance for affected farmers on how to protect their eligibility for Basic Payment Scheme, Countryside and Environmental Stewardship schemes.

Under rules governing the schemes, eligibility could be affected by land not being available for productive use.

It follows Mr Sunak making the case for flexibility to Farming Minister George Eustice in the wake of the flash-flooding incident on the afternoon and early evening of July 30 when Swaledale, Arkengarthdale, lower Wensleydale and Leyburn were hit by more than a month’s rainfall in a few hours.

Walls, roads, buildings and livestock were swept away in the deluge.

Mr Sunak said: “In the days following the floods I spoke at length to the Farming Minister about the need for a Cumbria-style Farming Recovery Fund and, just as impoirtantly, the need for flexibility from the Rural Payments Agency in the way it administered the payment schemes.

“The idea that RPA officials might start throwing the rulebook at our farmers who, in many instances, have suffered pretty catastrophic losses didn’t bear thinking about so I am delighted the RPA and Defra have responded so helpfully.”

In the guidance notes issued this week five areas where the RPA will be flexible are highlighted:

The RPA has also given an assurance that any scheduled farm inspections in the affected areas will be postponed until the situation eases.

The full guidance pack with details of how to apply for temporary measures/minor change requests or force majeure can be found on the link below.

The £2m Farming Recovery Fund was announced earlier this month after Mr Sunak’s pressing of Ministers to respond to his constituents’ plight. This will provide affected farmers with grants to cover their uninsured losses. Details of how this scheme will be administered are expected shortly.