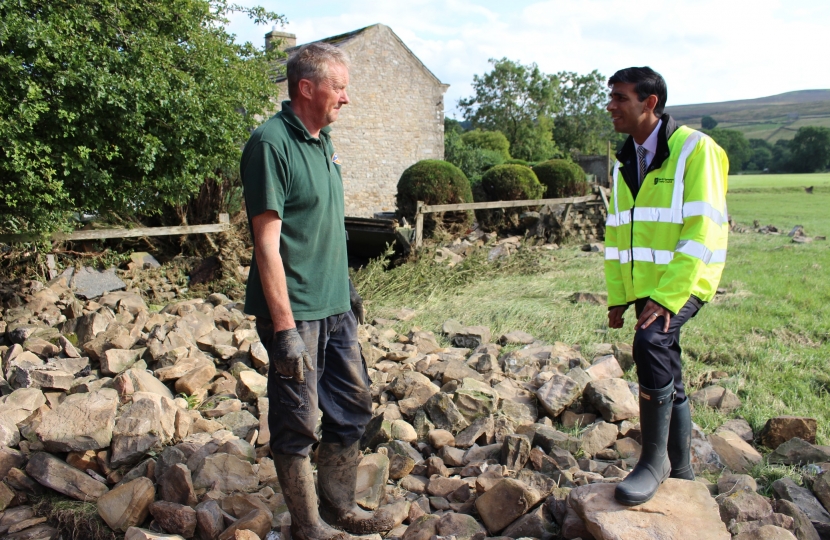 The money will match-fund the sums raised locally to assist individuals and businesses on the road to recovery after the flooding in Swaledale, Arkengarthdale and Wensleydale in July 2019.

More than 300 homes, 30 businesses and 50 farms were affected after a month’s typical rainfall came down in just two hours.

The decision to match the funds raised locally and which have been administered by the Two Ridings Community Foundation was revealed in a letter to the Richmond MP by Communities Minister Robert Jenrick.

Mr Sunak had backed a request from the Foundation, supported by local councils, the NFU and the local enterprise partnership, to grant the additional funding as had been the case in previous larger-scale flooding incidents elsewehere in the UK

Mr Jenrick acknowledges the role played by Mr Sunak in pressing for the funds to be made available “In recognition of the hard work of local charities, volunteers and residents in Richmondshire who have united in the effort to rebuild their local area and community.”

Mr Sunak welcomed the decision “This is good news for the individuals and businesses still recovering from the devastating events of 10 months ago and now are also coping with the impact of Coronavirus.

“On the occasions I visited the area immediately after the flood, it was clear to me that the impact of the deluge would be felt for many months, possibly years, so this additional funding will help with the continuing recovery efforts.”

The news was welcomed by Jan Garrill, Chief Executive of Two Ridings Community Foundation.  She said: “This news from the Secretary of State is fantastic for the communities of Swaledale, Arkengarthdale and Wensleydale.

“Many in these dales were so badly impacted by the devastating floods back in July 2019. Being able to match the generous local donations and serious fundraising efforts made with government funding means Two Ridings can continue to support the people whose homes, farms or small businesses were flooded and even now are still feeling the financial, practical and emotional impacts. Only this week we were hearing about the severe financial strain many are still under.

“We are especially grateful to local partners like Rishi Sunak MP, the NFU and local community and business leaders who have helped us make the case for this support.”

The Leader of Richmondshire District Council, Cllr Angie Dale said: ”I am delighted the government has recognised the severe hardship the communities of the Dales faced – and are still facing – as a result of these floods.

“As a council we added our backing to the pressure to release this match funding which will allow the Foundation to continue to provide the support these communities need.”

Mr Sunak has previously secured more than £5m from Government departments to help the area recover.

North Yorkshire County Council received £3m to cover the cost of rebuilding two bridges swept away by the floods. A £2m Farming Recovery Fund has provided grants of up to £25,000 to cover farmers’ uninsurable losses  and Richmondshire District Council has been paid £180,000 – the full amount of the money it claimed for its additional costs in responding to the flooding.