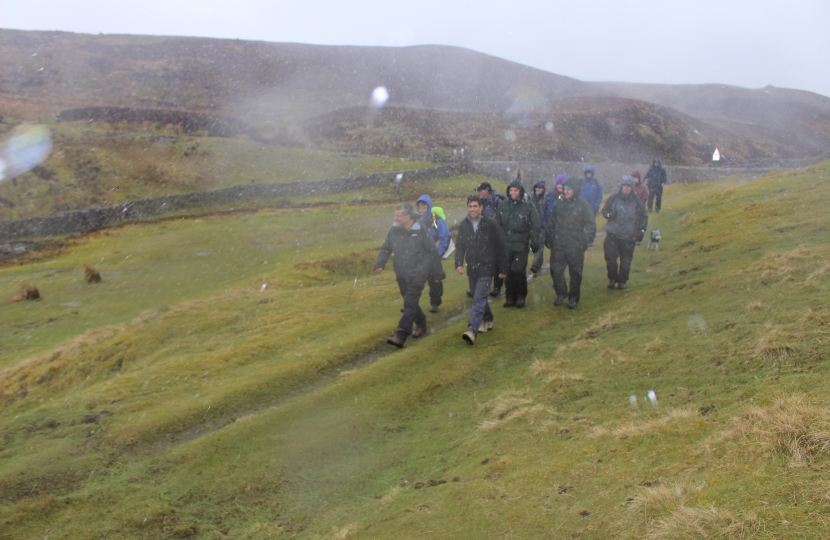 The route, which runs for 190 miles across the North of England and through the heart of the Richmond (Yorks) constituency, is widely recognised as one of the most scenic and beautiful walks in the world – but has no official status.

It was devised by the legendary fellwalker Alfred Wainwright and published as a book in 1973 but it has never been made a UK National Trail. Fifteen other long distance routes in England and Wales are designated National Trails and receive public funding for path maintenance, signposting and promotion.

He said: “I am delighted my Coast to Coast – Make it National campaign has been formally adopted as a policy pledge and look forward to helping to deliver that pledge should we be returned to office.

“The Coast to Coast route is a big driver of the visitor economy in the Richmond constituency and designation can bring even more benefits in term of sustainable tourism growth. More Coast-to-Coasters means more tourism but without the traffic that visitors generally generate.”

In 2016, Mr Sunak launched a campaign for the route to be designated a National Trail and collected a petition in support signed by more than 70 local authorities along the walk from parish councils to county councils and national parks.

It was also supported by the Wainwright Society, custodians of the late fellwalker’s legacy, and endorsement from Wainwright enthusiasts. They included the broadcasters Julia Bradbury, presenter of the BBC’s Countryfile, and Eric Robson, former host of the BBC’s Gardeners’ Question Time.

Eric Robson, who is chairman of The Wainwright Society and made a series of TV programmes with Alfred Wainwright, said at the time: “The Coast to Coast is a wonderful route and I am fully supportive of this campaign to have it officially recognised as a route of national importance. I applaud Mr Sunak’s initiative in taking up this cause.”

Recently Julia Bradbury wrote in The Times newspaper restating the case for the route to be given National Trail status.

The Ramblers Association welcomed the pledge. A spokesman for the Richmondshire branch said "Richmondshire Ramblers have been longstanding supporters of the campaign to make this iconic long-distance walk a National Trail.

"The potential benefits to ramblers are significant. National Trail designation should bring with it the resources needed to maintain or upgrade the route where it is not in the best condition.

"It will also maximise the economic benefit the walk brings to the Richmondshire area through an increased number of walkers coming through the area, using local services and accommodation. It is a very sustainable way of boosting our local tourism industry."

The manifesto pledge was also welcomed by Cllr Carl Les, leader of North Yorkshire County Council. He said: “North Yorkshire is well known now for cycling, both on and off road, but we’ve always encouraged other outdoor activities, especially walking. Making the Coast to Coast a National Trail will help with the walk’s profile at home and abroad and encourage more visitors to come and share our beautiful countryside.

“It will also encourage local people to tackle more of this fantastic walk on their doorstep with all the associated health benefits we know walking delivers.”