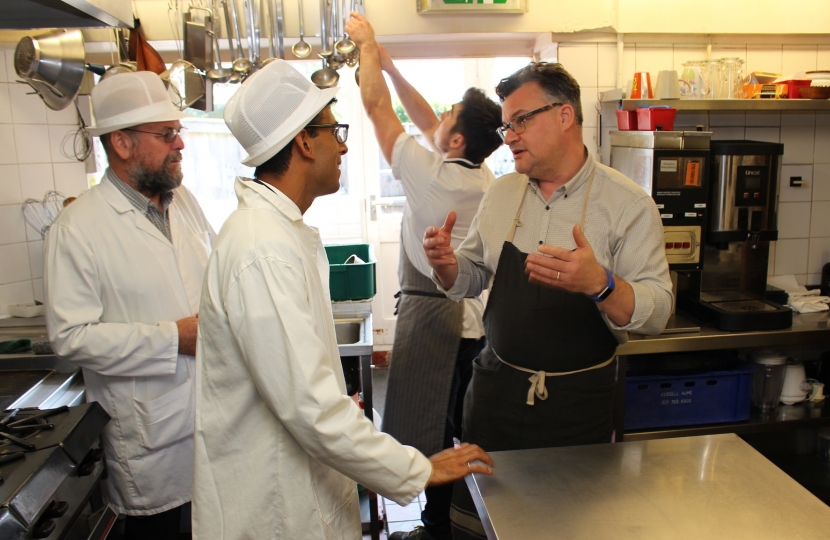 The Government will change the law to ensure food outlets display their food safety ratings, following the intervention of Richmond MP Rishi Sunak.

Mr Sunak wrote to ministers after discovering that while places serving food to the public in Wales and Northern Ireland have to display their 0-5 food hygiene ratings, establishments in England do not.

The current anomaly in the law means that hospitality businesses in England are encouraged to publicly display their ratings, but they do not have to by law.

Mr Sunak wrote to health minister Steve Brine about the anomaly and to request an update on the government’s policy.

Mr Brine replied saying the Food Standards Agency (FSA), the Government body which runs the rating scheme, will legislate to bring England into line by 2020.

Mr Brine said the FSA was building a strong case for the law change. For example, the number of businesses with the best rating of 5 in Wales had increased 21 per cent since the introduction of mandatory display, compared with an increase in England of 13 per cent between 2013 and 2017.

Mr Sunak’s intervention follows a visit to the Sandpiper restaurant in Leyburn to see a food hygiene inspection take place.

The restaurant passed with flying colours, renewing its five (very good) rating but award-winning chef/proprietor Jonathan Harrison pointed out that while he was very proud to display his rating, other businesses serving food, who might not have as good a rating, or a poor one, did not have to display the inspector’s verdict.

Mr Sunak said: “I am really pleased by the Minister’s response and the Food Standards Agency’s willingness to iron out this anomaly.

“The food hygiene ratings system is a hugely useful tool for consumers to be sure that they and their familes are eating food perpared and served in hygienic surroundings. Public display of ratings is a strong incentive for business owners to adopt the very highest standards, which in turn will reduce incidences of food poisoning and other infections linked to poor food hygiene.”

Mr Harrison described the move as a “fantastic outcome”.

He said: “I mentioned the issue almost in passing when Rishi visited the Sandpiper so it is very positive that Government is going to act on the matter. Given that it is the law elsewhere in the UK, it is common sense that it applies in England too.”

The food hygiene ratings system uses a scale of 0-5. Five is top of the scale and means hygiene standards are very good and fully comply with the law. Zero is at the bottom of the scale, and means urgent improvement is necessary.

All ratings are published on the Food Standards Agency website at www.food.gov.uk.