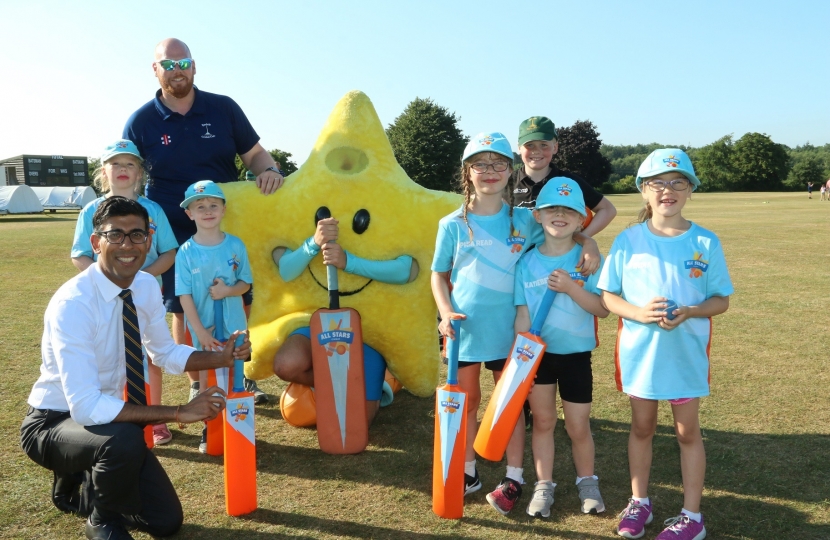 Rishi Sunak has welcomed the growing popularity of cricket among young people in Bedale.

As part of an English Cricket Board (ECB) initiative, Bedale Cricket Club have extended itsrange of junior groups with the All Stars which  are designed for children aged 5 to 8 years.

Now after only 8 weeks they have over 30 active members and the coach Paul Croft believes this reflects a growing trend in the area.

He said: “We already have over 40 in our other groups of under 9s, 11s and 13s and the response to the All Stars has been great.

“The other teams play competitively but the All Stars is just for fun; we also have a lot of adult assistance which helps greatly.

“I think cricket is thriving in the area and Joe Root is their hero.”

The club have several good players who represent North Yorkshire and the Hambledon League.

The club invited along Richmond MP Rishi Sunak, who is a keen cricket enthusiast, to see them in action for himself.

After pitting his slightly dormant field craft skills against the boys and girls, Mr Sunak declared himself impressed.

He said: “I had a wonderful time here in Bedale; the children really put me to the test.

“What could be better on a sunny Friday night, here in Bedale seeing all these young people enjoying a new sport.“