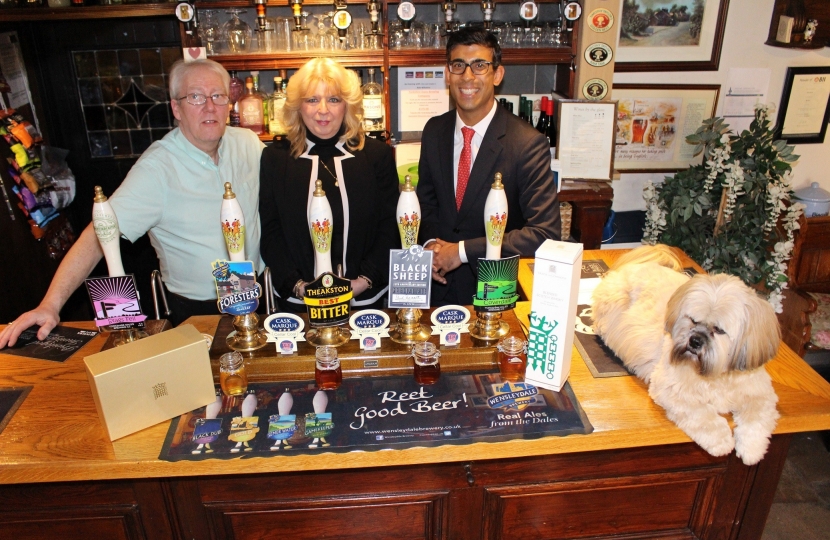 Dissatisfaction with the traditional ‘tie’ between tenants and pub companies -  a PubCo - was the main finding of a survey of more than 100 pubs carried out by Mr Sunak in his Richmond (Yorks) constituency.

The survey also reveal widespread lack of awareness of how the new Pubs Code – introduced by the Government 18 months ago - is designed to improve the relationship between pub tenant and landlord.

The results mirror those of a national poll published this month which reveal that almost two thirds of tenants are not aware of their right to request “market only rent” terms – a tenancy agreement with no drinks and services tie.

Other key findings of the survey were:

Mr Sunak said he was concerned about the lack of awareness about the provisions of the statutory Pubs Code to regulate the relationship between tied pub tenants and the large pub-owning businesses and the existence of an independent Pubs Code adjudicator to enforce the code and arbitrate in disputes.

He said: “The Pubs Code was introduced to ensure fair and lawful dealing by pub-owning businesses in relation to their tied tenants and to further ensure tied pub tenants should be no worse off than if they were not subject to any tie.”

Mr Sunak said he had sent out information about the code and adjudicator to all the pubs who asked for information after completing the survey and he would seek a meeting with the Pubs Code Minister Richard Harrington to discuss the results of the survey.

He would also use the survey results to raise policy issues in Westminster such as alcohol taxation and overseas examples of differential taxation policy for pubs. In Australia a lower rate of beer duty applies in pubs.

Mr Sunak said the Government had already taken steps to support pubs in recent years, such as the removal of the beer duty escalator in 2013 and the three successive reductions in beer tax that followed. Measures to help pubs with their business rates had also been introduced.

“We should keep all of these issues under review as we seek to protect the role of pubs in the community,” he added.

Mr Sunak said he was very grateful to the 112 tenants and landlords who had taken the trouble to complete the survey.

He said: "Pubs are one of the cornerstones of our rural communities, a vital part of the social fabric. They provide a lot of employment and remain the beating heart of many small villages where over time other facilities have been lost."

The survey was welcomed by the North West Yorkshire branch of the Campaign for Real Ale.

Branch chair Vince Rutland said: "CAMRA welcomes Rishi Sunak's survey into the pub sector, and would encourage other MPs to follow his example by investigating the issues facing pubs within their constituency.

“It is clear that many tied licensees are not aware of their rights under the new legislation. While we have seen  some progress with the appointment of Fiona Dickie as the Deputy Pubs Code Adjudicator and the speed at which arbitrations are being made, more now needs to be done to promote the rights of tied licensees and communicate the outcomes of cases that are brought forward for arbitration."