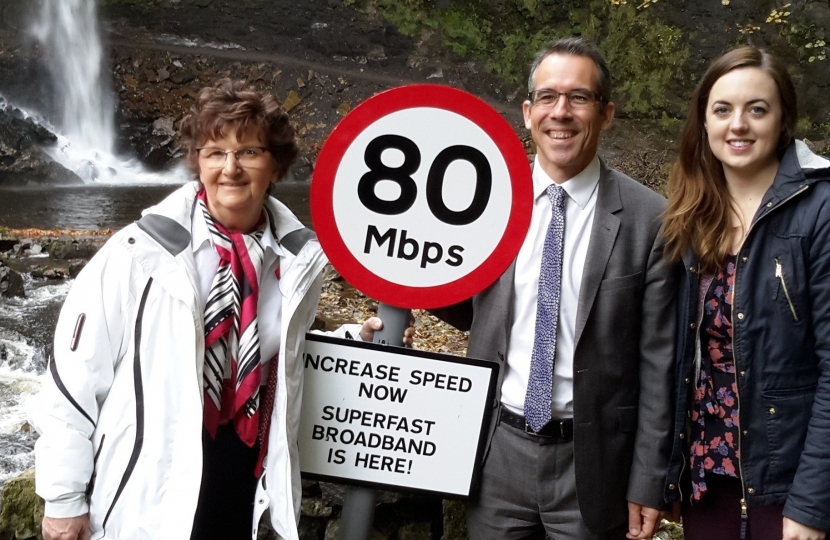 RURAL residents turned out in force to learn more about improved broadband services in the Yorkshire Dales.

The response was welcomed by Richmond MP Rishi Sunak who said it was vital people and businesses used the new service to ensure other as-yet-unconnected communities could benefit from superfast broadband in the future.

Members of the team responsible for installing the improved broadband network toured the length of Wensleydale to answer people’s questions about the new high-speed service. They stopped off at village pubs for tea and sandwiches - along a 16-mile route from Hardraw to Leyburn in a bid to encourage residents to sign up.

More than 5,000 homes and businesses across the Upper Dales are now able to enjoy faster broadband, with around one in five premises already subscribing to the improved service. By 2017/18 95 per cent of premises in North Yorkshire will have a superfast service.

The Superfast North Yorkshire project team used a minibus from the Little White Bus community transport service to make their journey and give out promotional material and talk to people about the benefits of high-speed broadband.

The team visited 20 pubs in all, including the Green Dragon at Hardraw, at the White Rose in Askrigg, the Fox and Hounds, West Burton and the Golden Lion at Leyburn, speaking to more than 75 people in the course of the tour.

Fibre broadband first arrived in the Dales in autumn 2014. The task to get the fibre technology from the telephone exchange in Leyburn to Hardraw involved building the longest fibre feed or ‘spine’ of the Superfast North Yorkhire roll-out to date – 17 miles in all

The mammoth engineering task involved clearing more than 100 blockages in underground ducts, with giant vacuums brought in 15 times to clear silt and debris washed into the ducts in an area which, being high in the Pennines, gets more than its fair share of rainfall.

The digital spine feeds 19 fibre enabled green roadside cabinets, connecting up 13 villages along the route including Hawes, Hardraw, Sedbusk, Bainbridge, Gunnerside, Reeth, Redmire, Leyburn, Middleham, Thoralby, Newbiggin, Wensley and Askrigg. A further batch of villages will be connected up to fibre, in the coming months, as part of the second rollout phase of the Superfast North Yorkshire project, including Muker, Aysgarth, Thornton Rust and Carperby.

The promotional tour was welcomed by the MP for Richmond Rishi Sunak who said that because of the way the contracts for providing the new network worked good take-up rates for the new service helped to connect other even more remote communities.

He said: “Making sure that people take up broadband in areas where it is already available is a vital step if we are going to secure the local funds necessary to connect the ‘final 5 per cent’ as quickly as possible and I welcome the work Superfast North Yorkshire is doing to promote this goal.”

The Superfast North Yorkshire project was the first in the UK to deploy fibre broadband using BDUK funds following the signing of the original £36.4m contract between North Yorkshire County Council and BT in July 2012.

BT was chosen as the private sector partner in the project following an extensive selection process by the County Council. BT is contributing £10 million towards fibre deployment in “non-commercial” areas whilst the county council is using its £17.8 million share of BDUK funds and a further £8.6 million coming from the European Regional Development Fund for the first phase of the project.