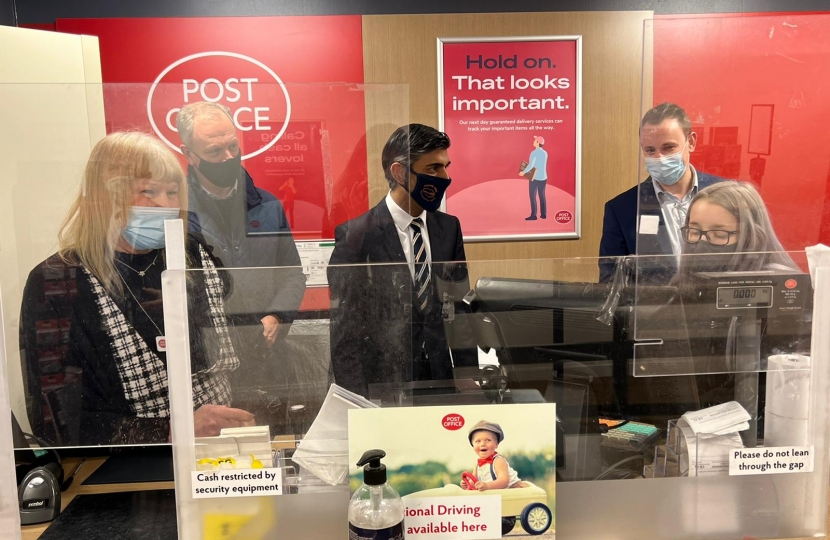 He organised the meeting at the branch attended by the chief executives of both organisations after repeated and unexpected closures of the branch over the last six months.

Mr Cowling and Mr Read told Rishi that they recognised the importance of a service that could be relied upon, a robust staffing plan was now in place and they were confident that the difficulties encountered in 2021 were largely resolved.

Mr Cowling added that it had now recruited and trained sufficient staff to maintain a consistent and reliable service with the doubling of the pool of staff available to staff the counters.

Self-service machines for the simpler transactions would be introduced to speed up the service and reduce queues at peak times.

Rishi said: “I am grateful the chief executives of the two organisations responsible for providing the service came to Northallerton to answer my questions.

“They agreed with me that the situation has been unacceptable and that my constituents and their customers deserve a better and more reliable service. I welcome the actions they have already taken and their plans to ensure a consistent service in the future.”

The MP said that it was vital that the Northallerton branch operated normally – with the extra Saturday afternoon and Sunday opening hours introduced after the branch’s move from its old premises in 2019.

The meeting was organised after further disruption to the service in the second half of December which followed assurances given to Rishi by WH Smith and the Post Office in October.

He had contacted the organisations after sudden closures caused by Covid 19-related staff absences in the summer persisted into the autumn. WH Smith said it had encountered difficulties recruiting for vacancies at the branch but was confident it would return to normal operating hours, including Saturday afternoons and Sunday.

Rishi said he would continue to keep a close eye on the performance of the Post Office counter service and request progress updates as necessary.