Rishi's campaign for famous Coast to Coast path is successful 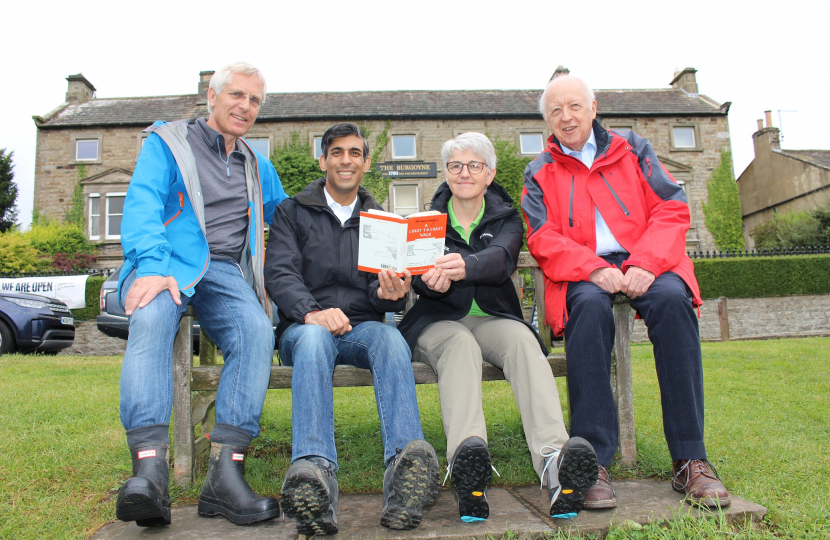 The world-famous Coast to Coast Walk is to be made a National Trail, following Rishi's successful campaign.

Work will now start on improving the route which runs through the heart of North Yorkshire.

The campaign to have the walk – created by the renowned fellwalker and author Alfred Wainwright almost 50 years ago – officially recognised was led by Richmond (Yorks) MP Rishi Sunak.

National Trail designation means the walk will receive more than £5m to upgrade the walk and for path maintenance, signposting and promotion.

The news was welcomed by hundreds of businesses along the 197-mile route who benefit from the thousands of walkers – many from overseas – who tackle it every year.

Mark Sandamas, managing director of Sherpa Van, a baggage-moving and accommodation-booking service based in Richmond, said the announcement was “fantastic news” for the many businesses on the route.

“The walk has the potential to bring so much custom to business in some of the most isolated parts of northern England.

“It already draws walkers from all round the UK and the overseas. National Trail designation will help bring many more and cement its reputation as one of the world’s finest long-distance paths.”

Karen Skeel, of Frith Lodge B&B at Keld in Swaledale, said: Our remote business relies in the main on Coast to Coast walkers, who we have the pleasure in welcoming from the UK as well as overseas. National Trail status will fund much-needed maintenance and way-marking in places, but also its promotion.

"Well done and thank you to Rishi for driving this through, like the C2C what a journey! ”

Victoria Howard, of Park House B&B near Ingleby Cross on the edge of the North York Moors, said designation would be “brilliant”.

“There are problems with signage on part of the route which I know many of our American and Canadian visitors find puzzling given the world-wide fame of the walk.

“It will also be important to resolve the safety issue at the point where the walkers have to cross the A19.”

Mr Sunak launched the Coast to Coast – Make It National campaign in 2016 with the Wainwright Society.

He gained the support of more than 70 organisations, local councils and the three national parks along the route for the idea.

Among the first to back the campaign was the Yorkshire Dales National Park. Its chief executive David Butterworth said: “The achievement of national trail status for the Coast to Coast path has long been an objective for us and our partners. We're grateful to all those who have worked so assiduously for this moment, both locally and nationally. We now look forward to delivering the recreation and economic benefits that flow from this decision.”

The route runs for 190 miles across the North of England from St Bees in Cumbria to Robin Hood’s Bay and through the heart of Mr Sunak’s constituency. It was devised by Alfred Wainwright and published as a book in 1973.

Mr Sunak said the designation would help to further develop the walk’s appeal and boost the economy of a vast swathe of northern England the route passes through.

He said: “This is a major milestone in the campaign. I am delighted that the Government has given the green light to Trail status.

“The campaign I launched back in 2016 received support from all parts of the North and I am grateful to all those who backed the idea.

“The Coast to Coast is vital to the visitor economy in North Yorkshire and Cumbria. Its world-wide fame brings people from all over the UK, Europe and the rest of the world to patronise our hotels, B&Bs, pubs, campsites and shops.”

Mr Sunak’s campaign has been supported by the Wainwright Society, custodians of the late fellwalker’s legacy, and endorsed by Wainwright enthusiasts. They include the broadcasters Julia Bradbury, former presenter of the BBC’s Countryfile, Eric Robson, the former host of the BBC’s Gardeners’ Question Time and mountaineer Alan Hinkes.

The Friarage: now a model for a small rural hospital

Ever since I was first elected as your MP, the Friarage Hospital has always been my number one local priority. The roots of this commitment stem from the affection we all have for this much-loved institution that plays such a critical role in looking after us all.