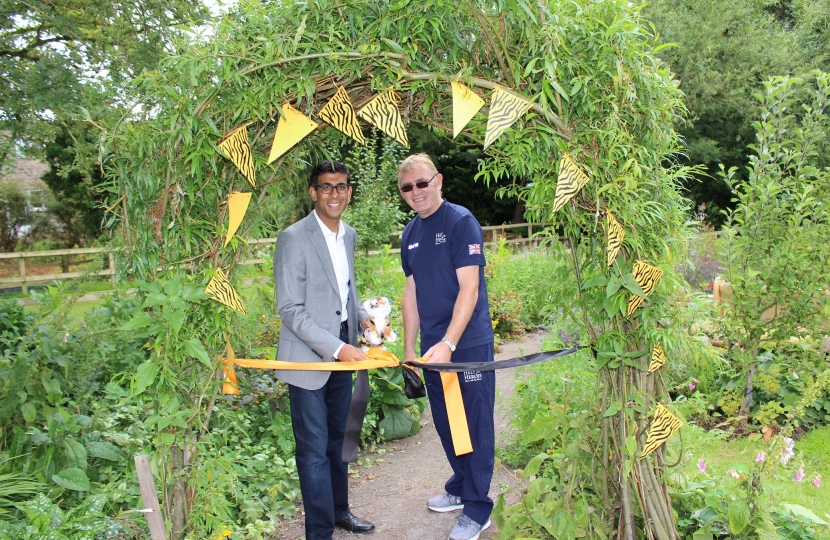 A garden created by the community in Tunstall, near Catterick, has been opened.

The Tunstall TIGER Project was officially opened by Richmond MP Rishi Sunak and local Army veteran Tom Hunter who has volunteered many hours of help in the garden.

TIGER  - which stands for Tunstall Island Garden Environmental Restoration – has seen the creation of a nature trail, sensory garden, woodland wildflower area and disabled access path on land behind the village hall.

The garden was made possible by resident Cec Pullan who has given permission for a small wooded island between Tunstall Beck and Thieves Gill to be used. Two bridges have been constructed across the beck to allow access for the nature trail.

The project manager Paul Greenwood said: “When we launched the TIGER project in 2016 the aim was to create a natural habitat for bees, butterflies and other pollinators, as well as making a beautiful space for everyone to enjoy.

“Thanks to the financial and practical help from businesses, foundations and individuals we have achieved our aim.

“I would like to thank everyone who has supported the project as you have helped to create something very special.”

The project cost around £8,000 and financial help was received from the Tesco store at nearby Catterick Garrison and County Cllr Carl Les who gave £1,000 from his North Yorkshire County Council locality budget.

Mr Sunak, who is also the Government minister responsible for parks and open spaces, said: “This is one of the finest examples of a community-led project of this type that I’ve seen and want to congratulate Paul and all the many volunteers for their hard work.”

Mr Sunak was assisted in cutting the ribbon by local Army veteran Tom Hunter who had recently returned from the Warrior Games in the USA. Mr Hunter has spent many hours helping with the project.