The case for more transport investment in the North 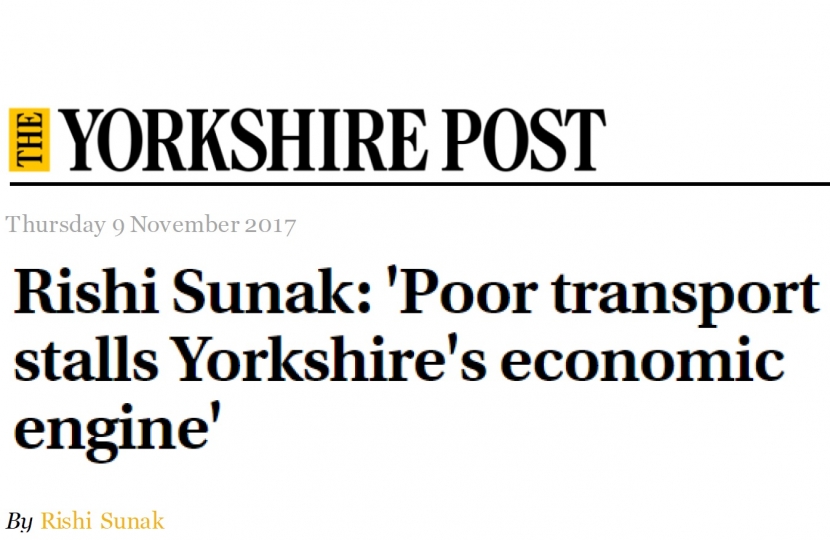 THE average commute into London begins 40 miles outside of the city.

If we could make that the case for Manchester, we could create an urban network with a population larger than that of New York, and with a GDP the size of Sweden. That is the scale of the prize for getting Northern transport right.

When I hear the phrase “Northern Powerhouse”, I must admit that my heart sometimes sinks because I know that too often I am about to hear a story of the past – the North as the land of the spinning jenny – or about a far too distant future of hyperloops across the Yorkshire Dales.Instead of talking about the past or the far future, let us not forget today that Britain’s 16 million northerners are already the nation’s ​economic engine.

Last year, it was not London or the South East that saw the highest growth; it was the North West. Thanks to Nissan’s Sunderland car plant, Britain is, for the first time since England won the World Cup, producing more cars than the French. Off Yorkshire’s east coast, Hull-made turbines are creating the world’s largest offshore wind farm. In science, the North’s 29 universities are at the forefront of our cutting-edge research. And, in Manchester United, the North is home to the most successful sporting franchise anywhere in the world.

But in the area of transport, we are still selling the North’s potential short. The cities and towns of the North are individually strong, but collectively are not strong enough. The only way to get the North to punch beyond the collective sum of its parts is to connect those parts. That is why better transport is key to unlocking the North’s true potential.

Today, converted buses known as Pacer trains, a technology phased out more than 12 years ago by Iran’s national railway, are still in use across the North.

Today, it is quicker to travel 283 miles from London to Paris than to travel less than half that distance between Hull and Liverpool. And today, too often bright, young entrepreneurial minds forged in Northern schools and universities find it easier to come 200 miles to London to find a job than to look in a northern city just 40 miles away.

But it does not have to be like this. After all, the distance between Manchester and Leeds is shorter than the length of the London Underground’s Central Line. The Government, to their credit, recognise the need for investment – and in my constituency upgrades to the A1 and A66 are welcome – but there is much more to do.

The Northern Powerhouse is a wonderful phrase, but the people of northern England deserve more than a slogan; they need action. There is no doubt that there has been a substantial funding gap between London transport and northern transport under successive Governments.

Secondly, London has Crossrail, the Midlands is getting HS2 and now we in the North need the Government to back Northern Powerhouse Rail. The Government’s £300m down-payment is certainly welcome, but we will need a lot more to show the people of the North that the Government mean business.

Thirdly, in my own area, the new Tees Valley Mayor has campaigned to upgrade Darlington station to vastly improve its capacity and connectivity. It is an excellent proposal and the Government should get behind it.​

Fourthly, from Teesside to Merseyside, and from Tyneside to the Humber, one of the North’s many strengths are its great ports. After we leave the EU we should create a new generation of US-style free ports to turbocharge manufacturing, trade and employment in our great Northern port cities.

Finally, we must make sure that the rural north is not left behind. Advances like autonomous vehicles will have their biggest impact in sparsely populated rural areas like mine – for example, by allowing elderly constituents to access distant health services more easily, or stimulating our local economies by allowing people to head to the pub without worrying about who will drive home.

It might seem strange to hear all this from someone born in Southampton, but I am deeply proud to now call the North my home and will speak up loudly and forcefully for my home’s bright future, and for an economy that, with the right investment, can be the powerhouse not just of Britain but of the world. Rishi Sunak is the Conservative MP for Richmond. He spoke in a Commons debate on the North’s transport – this is an edited version.