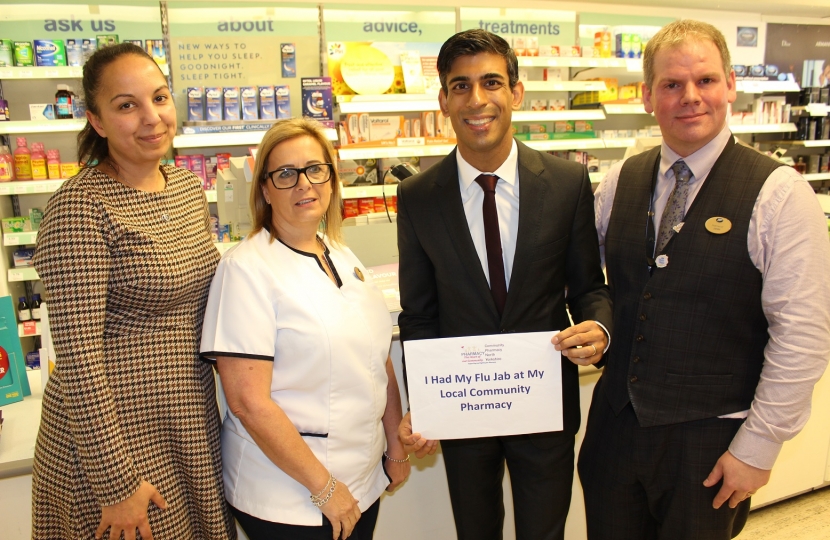 During a busy Friday last week, in between packed surgeries in Richmond and Great Ayton, visits to Richmond School and Bedale High School, I popped into Boots Pharmacy in Richmond’s Market Place to get my annual flu jab.

It was also an opportunity to promote the national pharmacy NHS flu jab vaccination service which is winding up to top gear as winter approaches.

The NHS flu jab is free for those most at risk from the complications arising from a bad dose of flu – the over 65s, those who are pregnant or with certain medical conditions like asthma or diabetes. Frontline health and social care workers are also eligible.

I don’t qualify but was more than happy to pay just £12.99 for my jab and to avoid the risk of something that can lay you low for days or weeks at a time.

By the way, my mum, who ran her own NHS community pharmacy when I was growing up and where I helped out for many hours as a teenager, asked me to use this week’s column to dispel one of those enduring myths about the flu jab.

It doesn’t give you flu! The vaccine does not contain any live viruses and cannot give you the bug. You might get a slight temperature and aching muscles for a couple of days afterwards but that’s not flu. Writing this five days after having had my jab, I am feeling absolutely no after-effects.

If you are in the at-risk groups – or like me would rather avoid a debilitating bout of the dreaded lurgy this winter - I would urge you to visit your local pharmacist and have the vaccine.

It is obtainable from your GP but your pharmacist is fully qualified to administer the vaccine, you don’t need to book and the whole thing just takes a few minutes. Also, using your local pharmacist helps reduce the workload on GP surgeries at a particularly busy time of the year.

I was delighted to receive the news last week that Richmondshire District Council’s claim for flood recovery funds under the Bellwin Scheme had been met in full.

Having seen first-hand the impact of July’s flash flooding in the Dales I had wanted to ensure that the drain on the local authorities’ funds in coping with the aftermath was kept to the absolute minimum so that other council services could be protected.

Having successfully argued for Bellwin to be activated for this particular incident, I kept in regular touch with the ministers in my old department at Housing, Communities and Local Government to ensure the council was given all the help it needed to make a successful claim, including passing on the Secretary of State’s personal contact details to the council’s chief executive to make sure this happened.

Even though the very localised nature of July’s floods was unlike other occasions where Bellwin funding has been allocated, Ministers fully took on board my arguments about the devastating impact – as did my colleagues in the Department of Transport to unlock the £3m funding for bridge repairs and the Department of the Environment, Food and Rural Affairs for the £2m Farming Recovery Fund. I am grateful for their assistance.

One last thing about Bellwin. People have asked me who or what Bellwin is or was. He was an Environment Minister in the 1980s who, as Lord Bellwin, first established the fund which has over the years been used for disasters like the 1987 Great Storm and the 2001 foot-and-mouth outbreak.