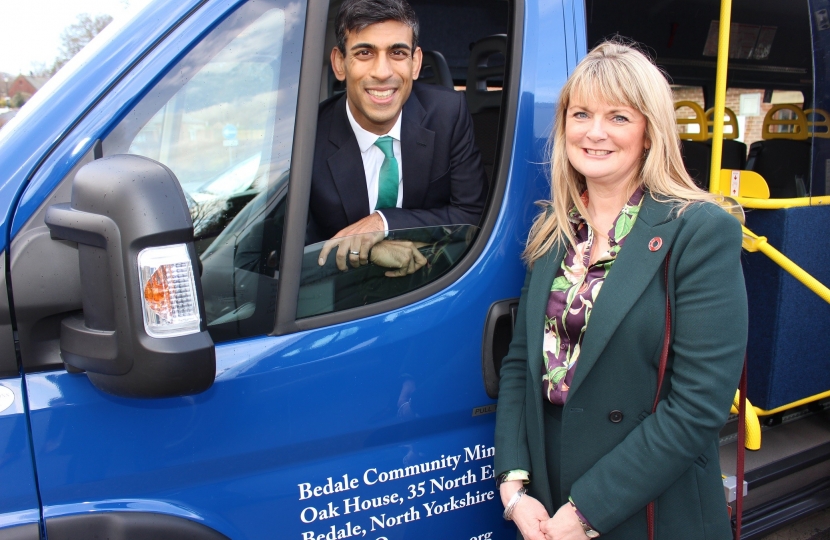 A new community minibus has taken to the roads around Bedale and I recently had the privilege of sending it on its way.

The launch of the new vehicle at the Dales Centre was a great opportunity to meet the wonderful team of volunteers behind the charity which since 1993 has been providing a valuable service to people, particularly the elderly, in and around the town.

The new minibus, part funded by a generous grant from North Yorkshire County Council, will help maintain its existing services, including the one helping patients get to their appointments at the local GP surgery, and develop new ones like the weekly trip taking visitors to the James Cook University Hospital in Middlesbrough.

Bedale Community Minibus is one of a number of community transport operators in the constituency who provide an invaluable service keeping our most rural communities connected.

It is part of the voluntary sector the Government has been keen to encourage. In recent years the £25m Community Transport Minibus Fund has funded a new vehicle at Bedale but also for Appleton Wiske Community Minibus, Upper Wensleydale community transport (The Little White Bus), Reeth and District Community Transport, Stokesley Community Care Association and the St John’s Community Centre, Catterick Garrison.

The Government is continuing its programme of assistance with £3.1m contributed through Bus Service Operator Grants last year.

In some circumstances they have a point. There is an oft-quoted example of a community transport organisation in a London borough which had a fleet of fifty buses and was operating services in Coventry and Sussex, using its charitable, publicly-funded status to undercut local commercial operators. That is clearly not what was intended.

A balance has to be found between allowing the community transport sector to flourish without jeopardising the commercial operators who are not all big national concerns but are often family-run businesses providing quality services and employment for local people.

It's a challenge the Government is currently grappling with. Last it year it held a consultation on the regulations governing the community transport sector.

In my contribution to that consultation I stressed to the Minister the need to bear in mind the special circumstances that apply in rural areas like North Yorkshire.

And while it is entirely correct that commercial bus operators should not be placed at a disadvantage, in rural areas the majority of the services provided by community operators are not commercially attractive.

It is vital that we do not place unduly onerous administrative and regulatory burdens on small organisations, many of them run entirely by volunteers like the majority are in this area.

In the case of a small charity like Bedale Community Minibus, a stricter regulatory regime which, for example, required it to hold an operator’s licence which forced it to incur additional costs for such things as a certified transport manager and for drivers to be fully qualified to professional standards, would probably threaten its existence.

It's a point I'll be making to the Secretary of State for Transport again. We must protect the really important role these organisations play in our communities.