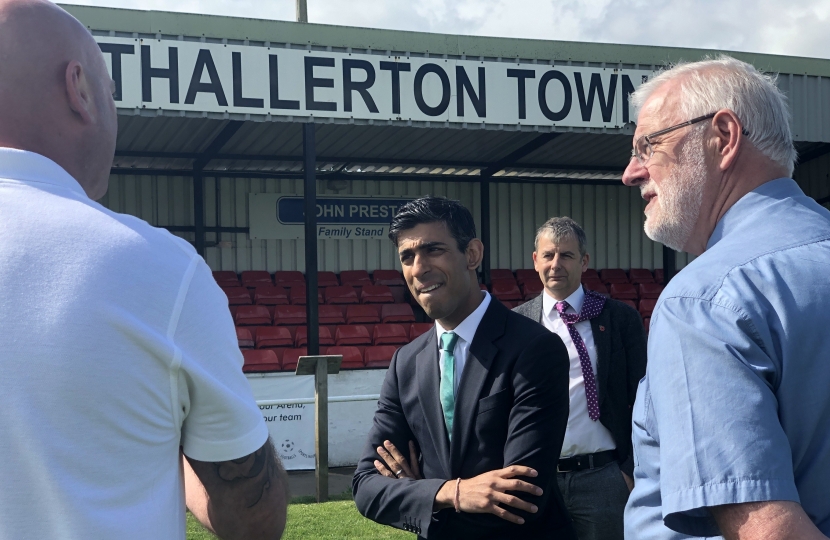 I know we are now well into the cricket season – and of course it is raining as I write this! – but football fans in Northallerton are currently on tenterhooks.

They are waiting for the outcome of a process which should see Northallerton Town Football Club promoted to Division 1 of the Northern League.

It follows a really good season when the club won its divisional cup competition and finished third in the Division 2 league table.

The Football Association (FA) has decided the club should be promoted but other clubs have a right to appeal against the decision – hence the anxious wait to see if the club has completed a memorable double!

It’s a club that’s going places in more ways than one. I recently visited the club at the invitation of chairman Peter Young to hear about its ambitious development proposals.

These include new changing rooms and lounge for players and officials, new facilities for the club’s burgeoning junior section and a kit room.

The club will shortly seek planning permission for the improvement scheme which is expected to cost around £200-250,000. It is rightly talking to its neighbours – Romanby residents and landowners before doing so.

The club is hoping to fund half of the sum it requires through grants but it will also need to do a lot of fundraising.

During my visit – when I also met Peter’s fellow directors and the club’s award-winning cook and licensee Sheila McGilvray – we talked about the funding of lower league clubs like Northallerton Town.

Some of the big money which we see being spent at the top of the football pyramid in the Premier League does find its way down to clubs like Northallerton. In the last year it has received grants totalling £45,000 for new floodlighting and pitch maintenance equipment from the Football Stadia Improvement Fund.

The fund has £6.5m a year to distribute which comes from the Premier League. I’ll be supporting any further applications Northallerton Town might make and would encourage other eligible local league clubs to do the same.

There’s also The Football Foundation – funded by the Government, the Premier League and the FA - which has £60m a year to distribute for community sports facilities.

Just last week it announced a £492,000 grant to Richmond School to cover the cost of a floodlit artificial grass pitch.

Talking of ground improvements, when it comes to scenic spots to play football, Richmond Town’s ground at Earls Orchard in the shadow of Richmond Castle can’t really be improved. It was no surprise to see it voted England’s most scenic ground in a recent nationwide online poll.

A similar poll on scenic cricket grounds would have Crakehall’s beautiful village setting vying for honours I would suggest and for playing rugby Wensleydale RUFC’s Cawkill Park, overlooked by Penhill, is similarly spectacular.

Talking of rugby our local clubs have also been taking some big strides forward in recent years. Wensleydale recently completed major improvements to its club house, changing rooms and kitchen with the help of grant aid from Richmondshire District Council and my personal support.

On the pitch, Northallerton RUFC have had a great season culminating in their appearance last month at Twickenham in the National Vase final. North just missed out to Honiton in a very tight final but by all accounts it was a memorable day at Rugby HQ for the team and their many supporters who made the trip down to London.