D&S column: the vital importance of our Pennine peatlands 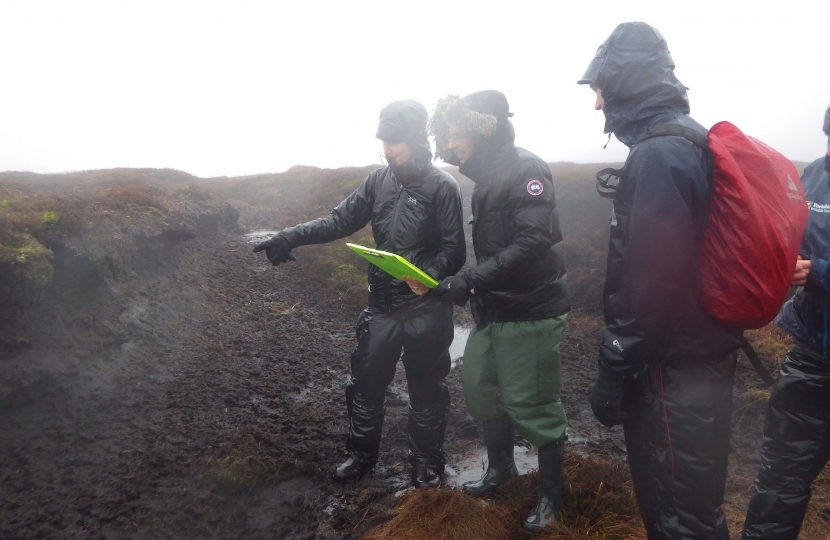 Gale-force winds, horizontal, driving rain and low cloud – Fleet Moss was a pretty uncomfortable place to be on a recent Friday morning.

Fleet Moss is on the very south western-most edge of the Richmond constituency in the high Pennines. To the west is Dodd Fell and Lancashire, to the east upper Wensleydale.

I was there with a team from the Yorkshire Wildlife Trust to see the work they are doing to restore the invaluable peat bog of Fleet Moss.

Peat bog doesn’t look very exciting – especially on a day when the weather means you are struggling to stand upright and can barely see 50 metres ahead. But it has an incredibly important role to play in mitigating climate change, in flood management and providing a range of environmental and social benefits.

What makes it so special is its amazing ability to absorb water – 90 per cent of peatland is water held in stuff called sphagnum moss - but its capacity to do so has been declining through erosion. During heavy rain, the water runs off the hills, sometimes with devastating consequences for the valleys and lowlands below.

There was a startling illustration of this after my meeting with the YWT team. Driving back down Beggerman’s Lane to Hawes, so much rainwater was pouring off the land the road had turned into a raging torrent. The car almost aquaplaned into Gayle Beck!

This rapid run-off of water causes a host of other problems. A huge amount of detritus damages lowland farmland, walls and public access tracks and sediment ends up in Semerwater, North Yorkshire’s second largest natural lake, threatening its status as a regional tourist attraction.

And further downstream it contributes to flash-flooding in Wensleydale and is thought to be a contributory cause of major flooding incidents in the Vale of York.

All that material washed off the tops further degrades the peatland’s ability not just to store water but also carbon. Globally, peatlands like Fleet Moss contain 550 gigatons of carbon which is more than twice the amount stored in the forests. Its role in helping to combat climate change is vital.

The Yorkshire Wildlife Trust team is using a wide range of techniques to restore the bog including revegetating with cotton grass, crowberry and sphagnum and creating slow dams in drainage channels with stone, peat, wood and coir.

The re-wetting of the bog also makes it much more attractive to wildlife – like short-eared owls – and provides essential cover for ground-nesting and migratory birds.

Peatland restoration is important work which the Government has committed £10m to sustain. The Pennine PeatLIFE programme, which is meeting the costs of the work on Fleet Moss, will in total restore 1,300 hectares of bog across the North of England.

The Environment and Agriculture Bills which are currently working their way through Parliament will create the framework for environmental projects like these to continue once we leave the EU. Peatland restoration is exactly the kind of “public good” a British agriculture support system should promote and provide additional income for hill farmers.

I will be working with Yorkshire MP colleagues, including Julian Sturdy whose York area constituents have suffered from the effects of flooding in the past, to ensure this happens.

To that end, I have organised a reception in Westminster in April for many of the organisations involved in peatland restoration, including the Yorkshire Wildlife Trust. Environment Minister Therese Coffey has agreed to speak.  We want to spread the word among MPs about the importance of this work in protecting the environment of the hills and the lowlands as well.