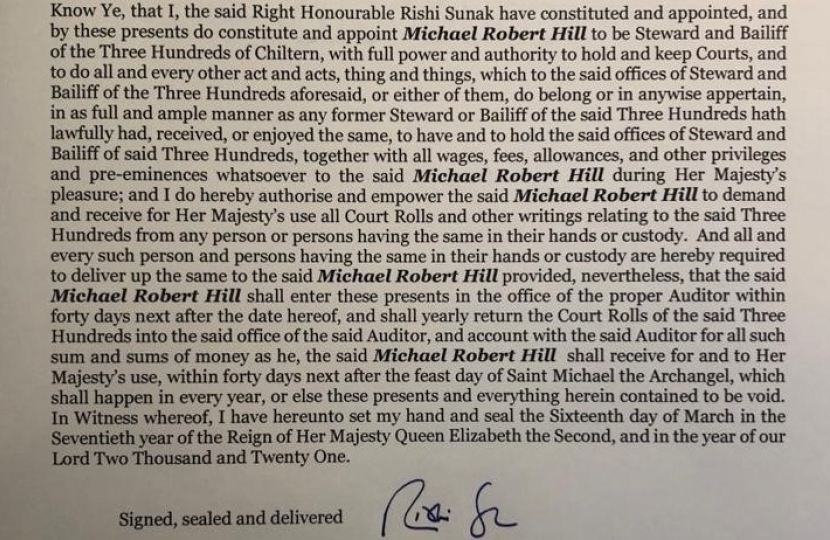 In the course of my working day in No 11 Downing Street many documents arrive on my desk for study and signature.

The majority of them are about the nation’s monetary and fiscal policy, the fine details of the UK’s finances and for the last year the Government’s response to Covid 19.

But recently, two warrants came to me for signature which were certainly out of the ordinary.

When I started this job a year ago I wasn’t aware that one of my responsibilities was overseeing an historic process which enables an MP to resign his seat.

One might think this should be straightforward and in practical terms it is but as Chancellor I have a small but important role to play in a procedure which has its roots back in the 17th century and the reign of James 1.

Back then serving in Parliament was often regarded as an obligation to be accepted only reluctantly rather than an honour to be eagerly sought.

Voluntary relinquishment of a Parliamentary seat was not, therefore, something to be encouraged.

So, the House of Commons passed a resolution which decreed that Members of Parliament could not directly resign their seats. Death, disqualification and expulsion were the only means by which a MP's seat could be vacated during the lifetime of a Parliament.

That is still the case today.

However, for practical purposes there had to be a way for a MP to legitimately leave their jobs as MPs which didn’t involve them committing a heinous misdemeanour – or dropping dead!

One way was by accepting a paid office of the Crown. This was because it was assumed that an MP receiving a salary from the Crown could not be expected to scrutinise the actions of the Crown or the Crown's government and would therefore be disqualified.

A variety of paid offices, such as crown stewardships, were used for this purpose but today just two remain and as I have discovered in recent weeks it is the traditional role of the Chancellor of the Exchequer to make these appointments by signing a warrant.

I have signed the warrants to appoint Mike Hill, the former MP for Hartlepool to be Crown Steward and Bailiff of the Chiltern Hundreds and Neil Gray, the former MP for the Scottish seat of Airdrie and Shotts, to the same role for the Manor of Northstead.

Signing these warrants as “Chancellor and Under Treasurer of Her Majesty’s Exchequer”, as the archaic language of the warrant has it, I very much felt the weight of history and tradition upon me and the part I am playing in the 700-year-old story that is our Parliament.

The two roles with their rather curious names are essentially nominal titles – with no salary, benefits or duties – simply enabling the MPs to stand down.

As the name implies the Chiltern Hundreds relate to lands in Buckinghamshire which back in the 13th century belonged to the Crown and were administered by a Royal Bailiff or Steward.

The Manor of Northstead is actually in North Yorkshire. In the 1600s, it was just a number of fields and farms on the outskirts of Scarborough.

Today the manor and its associated lands and farms have been redeveloped as part of the modern town including the well-known attractions of Peasholm Park and the famous Open Air Theatre.

Many famous political names have been appointed to these roles in the past, including one of my predecessors as your MP, the late Lord Brittan of Spennithorne, who resigned in 1988 to become Crown Steward and Bailiff of the Manor of Northstead before being appointed a European Commissioner.