D&S column: the welcome return of pupils to school 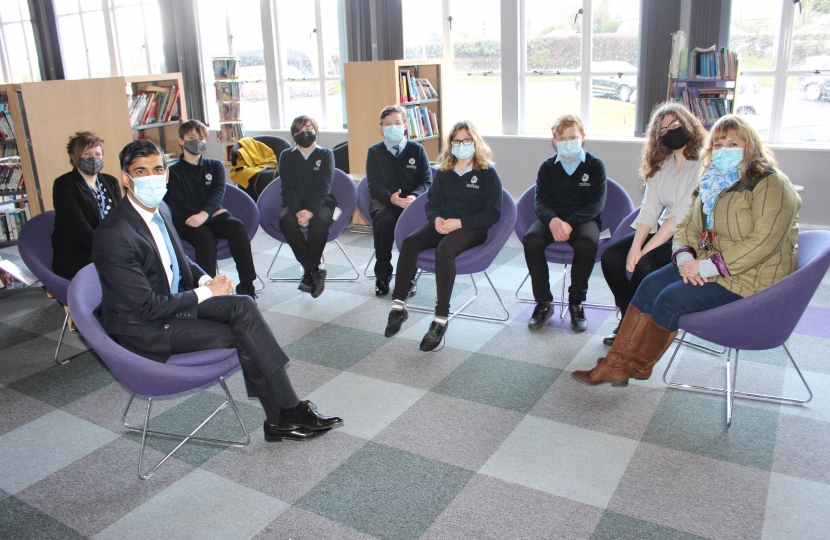 It’s been wonderful to see children return to school in the last two weeks.

Like many parents, I know how much my daughters have missed their classmates and their teachers.

There’s no substitute for lessons in the classroom for the best learning experience and the invaluable social interaction that comes with it.

The return of schools was the first priority in Step 1 of the four-step roadmap to a more normal life and last Friday I spent time in two Leyburn schools to see how they were progressing.

At The Wensleydale School, headteacher Julia Polley and her team, supported by parents and additional Government funding, had set up an impressive testing operation.

All through the week pupils at the secondary school had been taking quick swab tests in school before the full return to the classroom this week, with the tests designed to identify asymptomatic cases of coronavirus and provide additional reassurance for pupils, parents and staff.

Julia told me the lateral flow tests are painless, really quick and very effective. There had been no issues with the tests which provide a result within 30 minutes.

While at the school I had a stimulating Q&A session with a small group of pupils from across the year groups.

One of the questions put to me was why I became an MP?

It’s really down to my parents and their work as a family doctor and a pharmacist in the community where I grew up.

During the school holidays I often worked in my mum’s pharmacy, helping to deliver prescriptions.  I was always delighted to hear many of my parents’ patients and customers talk about the wonderful care my parents provided them and their families over many years.

That made a real impression on me as a teenager and inspired me to try to do the same – serving my community as its MP.

I next called in at Leyburn Primary School where, with no requirement for testing, the pupils had been back fully from March 8, for a second Q&A session.

Almost 30 Year 6 pupils had another set of great questions for me, including one about what it was like working in Parliament.

This gave me the chance to tell one of my favourite stories about the Houses of Parliament and the history of Westminster Hall – the oldest existing part of the Palace of Westminster.

In the days when it was a Royal Palace, King Henry VIII is known to have used the vast hall as a tennis court. In the 1920s when work was being done to the roof – the largest medieval timber roof in Northern Europe – workmen came across medieval tennis balls lodged in the ancient rafters.

I love the idea that they may have been there since King Henry mis-hit a forearm smash in the 16th century!

It was great to spend the morning seeing these two schools resuming face-to-face education and I’d like to thank everyone involved – staff, parents and volunteers – for all the hard work that went into ensuring a successful return over the last fortnight.

An expanding Stokesley business has full order books and is looking to expand as the economic recovery from the pandemic gathers momentum.