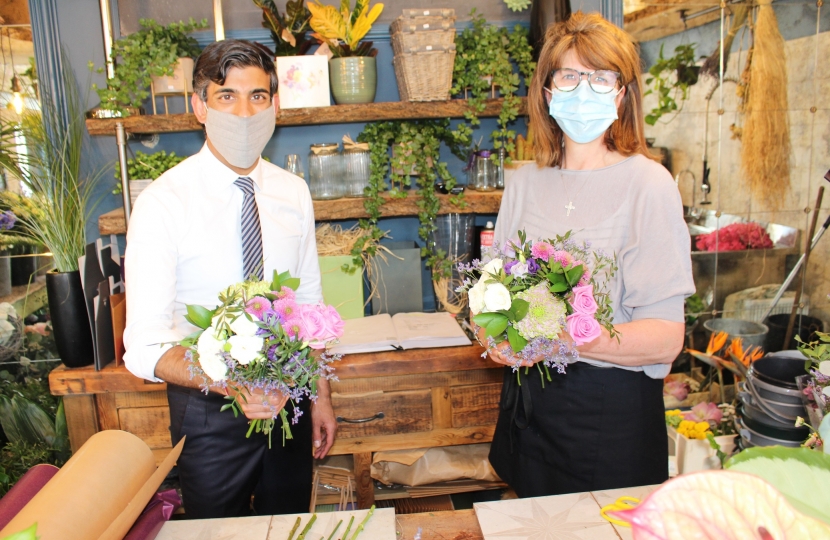 He said: “After what has been such a difficult year for many businesses, it is hugely encouraging to see enterprises like Diana’s not just re-opening but expanding and seeking out new opportunities. She has created a beautiful new branch for her established business.”

During his visit, Rishi tried his hand, under Ms Kaye’s expert guidance, at creating a mixed flower hand-tied posy. He also met and chatted to many of the villagers who had come to celebrate the occasion.

Ms Kaye said her interest in opening in the village was sparked after she had moved home to the village and saw the former village shop premises lying empty.

“I saw the opportunity to combine a working florists with something for the village community. We have plans for workshops in floristry which during the pandemic restrictions have been taking place virtually via video conferencing.

“A lot of flowers are sold online these days and I wanted to keep the art and craft of floristry alive by creating a venue to which people would travel to learn about flowers and how to work with them..

“I also wanted villagers to be able pop in, have a coffee and watch a professional florist in action.”

Diana Kaye established the business 36 years ago in Yarm. She added a further outlet in Fenwick’s department store in Newcastle 12 years ago.

Rishi has praised a school’s project to create a community garden and increase outdoor learning.