Fundraiser is a shining light during pandemic, says Rishi 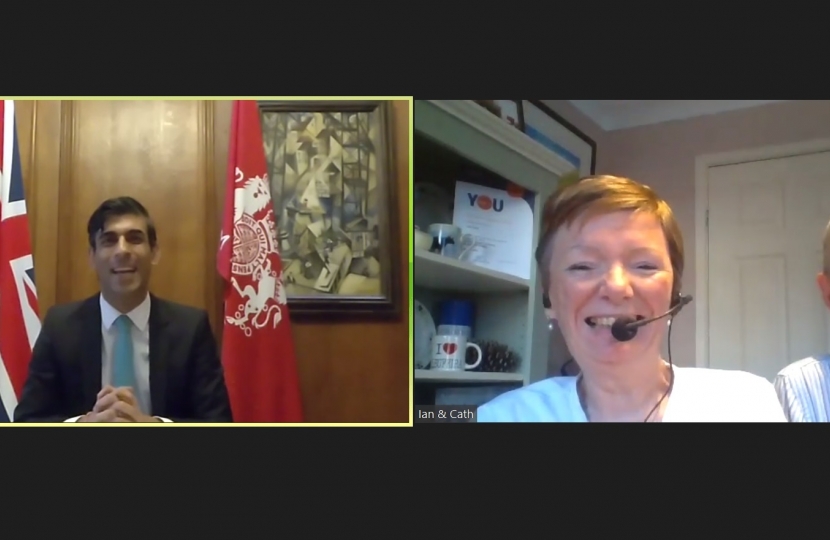 Cath Muir, of Eppleby, Richmond, received her award – virtually – from Rishi in a surprise video call from his office in No 11 Downing Street.

Mrs Muir, who suffers from motor neurone disease, has raised the money in many ways for the Motor Neurone Disease Association – nationally and locally – since she was diagnosed with the condition in 2014.

The pandemic has not stopped her. She has continued to fundraise while self-isolating, painting greetings cards that have been sold nationwide in support  of the MND Association and the Hambleton and Richmond MND Support Group.

Cath is also a baker and before her diagnosis ran the Cross View Tea Room in Richmond with her husband Ian.

Now she bakes from a specially-adapted kitchen created for her in her garage. Volunteers have delivered hundreds of her meals for vulnerable and elderly members of her community during the pandemic.

Mrs Muir said it was a lovely surprise to receive the award.

Rishi said: “I know of the many amazing things Cath has done to raise money for motor neurone disease charities in the past so I was delighted to present her with this well-deserved award from the Prime Minister.

“Despite of the impact of this terrible disease Cath just hasn’t stopped helping people in her community during this incredibly difficult year. She is truly inspirational and a shining light during dark times.”

The Prime Minister’s daily Points of Light award recognises outstanding individual volunteers, people who are making a change in their community and inspiring others. Each day, someone, somewhere in the country is selected to receive the award to celebrate their remarkable achievements.