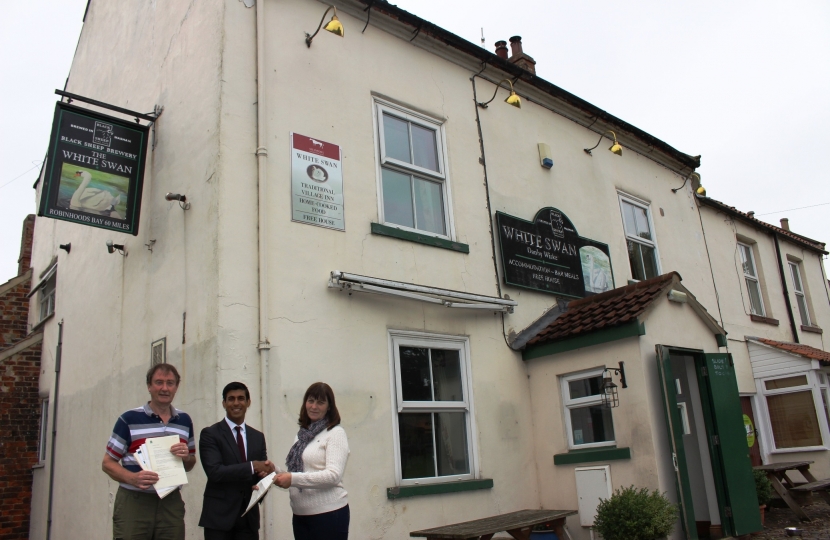 Local councils from Cumbria to North Yorkshire are lending their support to the MP's plan to have Wainwright’s Coast to Coast walk made a National Trail.

The route, which runs for 190 miles across the North of England, is widely recognised as one of the most scenic and beautiful walks in the world – but has no official status.

Mr Sunak has written to more than 70 parish councils, district and county councils, three national parks and one area of outstanding natural beauty the walk passes through or nearby to gather support.

“The response has been tremendous,” he said. “More than 25 positive replies have been received and they are coming in thick and fast.”

Among the first authorities to respond was Danby Wiske Parish. The Coast to Coast walk runs through the heart of the village near Northallerton.

The chair of the parish council, Cllr Margaret Goldie, presented the petition response to Mr Sunak outside the village’s White Swan pub where a chance conversation between landlord Steve Knight and Mr Sunak a year ago was the spark for the campaign.

Cllr Goldie said: “The parish council unanimously backed Mr Sunak’s request. The Coast to Coast is very important to the economy of the local area and we are keen to see its status recognised.”

Mr Knight said Mr Sunak had called into his pub during the 2015 General Election campaign and heard about the importance of the “Coast to Coasters” to the business.

He said: “I mentioned the walk’s lack of official status almost in passing but Mr Sunak pick up on it and said ‘ We should do something about that’.  And he has.”

Mr Sunak’s campaign was launched earlier this year with support of the Wainwright Society, custodian’s of the late fellwalker’s legacy, and endorsement from Wainwright enthusiasts. They include the broadcasters Julia Bradbury, presenter of the BBC’s Countryfile, and Eric Robson, host of the BBC’s Gardeners’ Question Time.

The first stage towards designation would be for Natural England to carry out a scoping or feasibility study. Mr Sunak aims to build support for the plan, locally and in Parliament, to release funding for the study.

Two of Mr Sunak’s Parliamentary colleagues whose constituencies are crossed by the route have pledged their support. They are Rory Stewart, the Conservative MP for Penrith and the Border, and Jamie Reed, the Labour MP for Copeland.