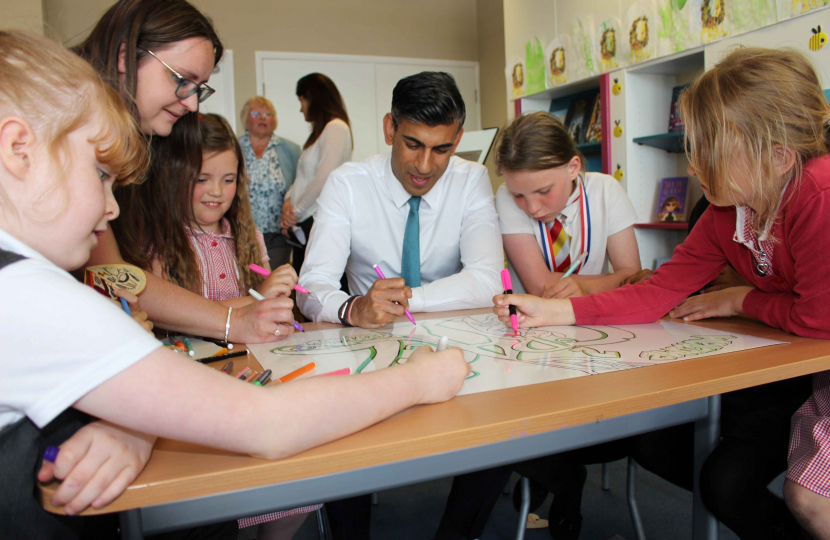 Rishi has praised the thoughtful and creative approach taken in the updating project at a local community library.

The Richmond (Yorks) MP conducted the formal re-opening of Colburn Library after a refurbishment designed to create a bright and comfortable space to encourage use by the local community.

The work was carried out after the charity, which manages the library, asked the local community what they would like to see at the facility in The Broadway.

Sue Young, Chair of Catterick, Richmond and Colburn Community Libraries (CRACCL), said questionnaire responses highlighted the need for improvements in the library layout, including the children’s area and public computers.  Residents also wanted to see an expanded range of activities on offer, especially for children.

She said: “The library was last refurbished in 2004 and it had become rather dull.  We wanted to create a welcoming and cheerful space and let people know we are about more than just the books.”

She added that the charity was determined to obtain best value for money from the £34,000 grant provided by the Richmondshire District Council’s Community Investment Fund and the charity’s own resources.

Low cost options were pursued including using kitchen worktops instead of standalone desks for the public computers, recovering soft furniture and reusing shelving.  The library has been re-carpeted throughout, energy efficient windows installed and the computer suite relocated to improve the layout.

Rishi said the refurbishment had resulted in a bright, airy and welcoming environment.  He added: “The thought and care that has gone into this welcome transformation is evident in the final result.  I am sure it will be well-used by the community and I congratulate everyone at the charity on what has been achieved.”

During his visit, Rishi unveiled a plaque to make the re-opening, met the charity’s Trustees and some of the volunteers who help to run the library.  He also joined a group of children from Colburn Community Primary School colouring in a new logo for the library.