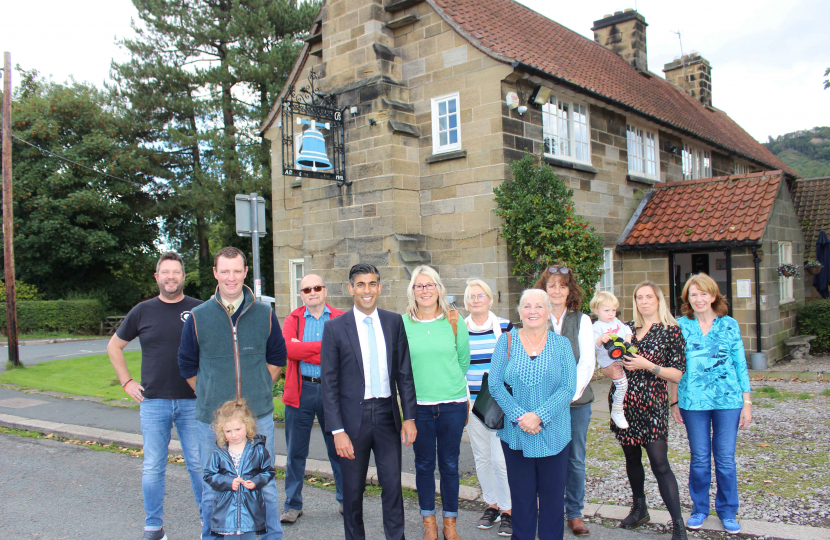 Rishi is supporting villagers campaigning to keep the famous Coast to Coast Walk coming through the heart of their community.

He met parish councillors and businesses in Inglebly Arncliffe and Cross who fear the route could be diverted as part of the work to bring it up to National Trail standard.

Last month, the Government announced that the long-distance walk which straddles the North of England from St Bees in Cumbria to Robin Hood’s Bay on the North Yorkshire coast would be upgraded with an investment of more than £5m.

It followed a five-year campaign by Rishi to have the walk officially recognised and supported as one of the family of UK National Trails. He successfully argued that a walk which attracts more than 6,000 walkers a year, many of them from overseas, should be improved and promoted to boost the economies of the hundreds of rural communities it passes through.

Work will start shortly on improvements to the path, including the surface of some sections and better waymarking, but an outstanding issue is the A19 dual carriageway near Ingleby Arncliffe where the walkers have to cross four lanes of traffic travelling at speeds of up to 70mph.

National Highways, the Government-owned body which looks after trunk roads like the A19, is looking at various options. They include a footbridge, an underpass or a diversion of the route to use the existing bridge over the A19 at Trenholme Bar - what used to be known as the Black Swan crossroads.

Villagers at Ingleby Arncliffe, Ingleby Cross and nearby Osmotherley fear a diversion north would take the walkers away from their communities and harm the businesses which rely on the Coast to Coast trade.

After his meeting with villagers, Rishi said he would be contacting ministers about the matter.

He said: “Diversion of the route to the north would not work for these communities or the walkers. It would add up to eight miles to the trail and take them away from accommodation and refreshment.

“I will be urging the Minister to ensure the original route established by Alf Wainwright, creator of the Coast to Coast, is stuck to. These businesses help to make the Coast to Coast experience for visitors from all over the world and must not miss out on the benefits of designation.

“The principal point of my campaign was to give an economic boost to isolated rural communities on and near this world-renowned trail. Ingleby Arncliffe, Ingleby Cross and Osmotherley have many enterprises which rely on trade the walk on its current route delivers. I will work to ensure that remains the case.”

He said: “The existing route has been in place for years and years and people want to follow the original Wainwright route – to follow in the great man’s footsteps.

“If they did re-route, the walkers would still stick to the original anyway. It’s the route that’s in all the guidebooks.”

A statement from Ingleby Arncliffe Parish Council said: “We feel the only option to safeguard our local businesses’ futures would be for a footbridge to be erected over the A19 as close as possible to the original C2C route.”