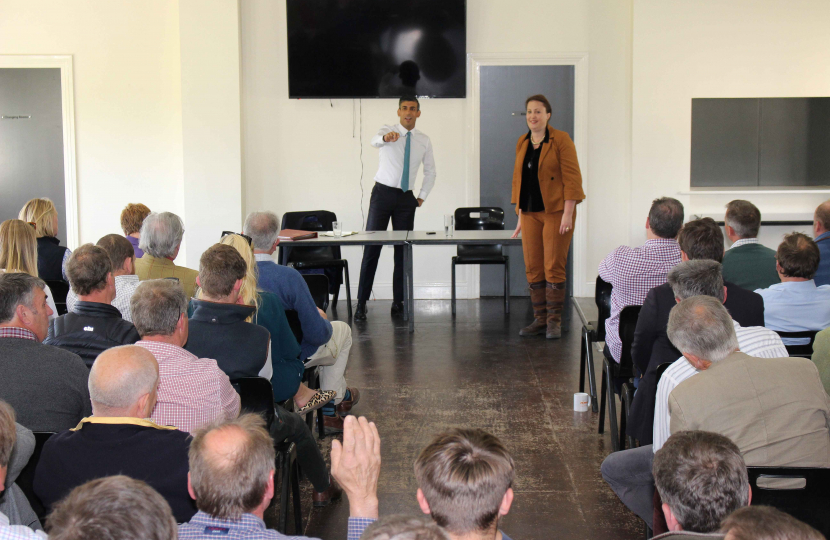 More than 100 farmers and farm industry experts took part in the meeting organised by Rishi.

With Rishi acting as chair, the Minister dealt with a wide range of questions about the under-pressure poultry and pig sectors, food security and strategy, TB and the transition to a new farm support system.

In her opening remarks, Victoria Prentis said she was pleased by the pragmatic approach taken by many farmers to the seven-year transition away from the Basic Payments Scheme under CAP to the new Environmental Land Management Schemes (ELMS).

She said: “You understand what we are trying to do – producing the food the nation needs but also delivering the environmental benefits – the public goods – that the nation wants.

“I’m delighted that we have seen a 40 per cent increase in Countryside Stewardship applications in the last year."

The Minister said she understood and acknowledged “the noise and the worry” around the changes, especially so since the start of the war in Ukraine which had led to steep increases in energy, feed and fertiliser prices.

She was determined to ensure the new ELM schemes were sufficiently well tailored to work in all parts of the UK for the many different types of farms.

In response to a question about the Government’s commitment to UK food production and a delay to this year’s 20 per cent reduction in BPS payment, the Minister said the transition schedule had to be kept to.

“It is a hard message but we have to do the transition,” she said. “The farming budget, thanks to Rishi’s support, is the same. We have the same settlement for the farming industry as under the CAP. It’s my job to make sure it is targeted at the sectors that need it most and that may include pigs and poultry which have not benefited in the past under the old system because of the small acreages involved.”

She added that the switch from the BPS to the payments for environmental public goods was essential to convince the public of the importance of farming, and to reward farmers for the work they do to as stewards of the countryside, to protect the landscape and wildlife.

“We have to get the consumer to a place where they understand our value.”

Rishi agreed: “This point is really important. If we don’t do this [the transition] now in a way that gets broader support, it will not be sustainable in the long run. We have gone for a lengthy seven-year adjustment and we are doing it as gradually as possible.”

The Minister said she was acutely aware of the pressure on farmers because of rising input prices which was why it had been decided to bring forward the first BPS payments to assist with cash flow, and introduce payments in the first year of the Sustainable Farming Incentive to support farmers to use alternatives to chemical fertilisers.

On food security, she said the issue was, rightly, high on the agenda. She highlighted the importance of self-sufficiency but noted that the UK population would always want to eat certain foods like avocados and rice which had to be imported.

There was “a good story to tell” in products like beef, eggs and milk where the UK was near 100 per cent self-sufficient and lamb where the UK produced more than it consumed.

The picture was less encouraging with fruit (only 16 per cent self-sufficient) and vegetables. These were sectors she intended to encourage and support.

A substantial Government report on long-term food strategy was due to be published in the coming weeks, she added.

Asked about measures to combat TB in cattle, the Minister said a lot of work had been done on producing a cattle vaccine and there had been recent good news about a new trial which suggested real hope of an effective vaccine.

“We have to make sure that any vaccine roll-out is completed before we finish culling – which has definitely helped,” she added.