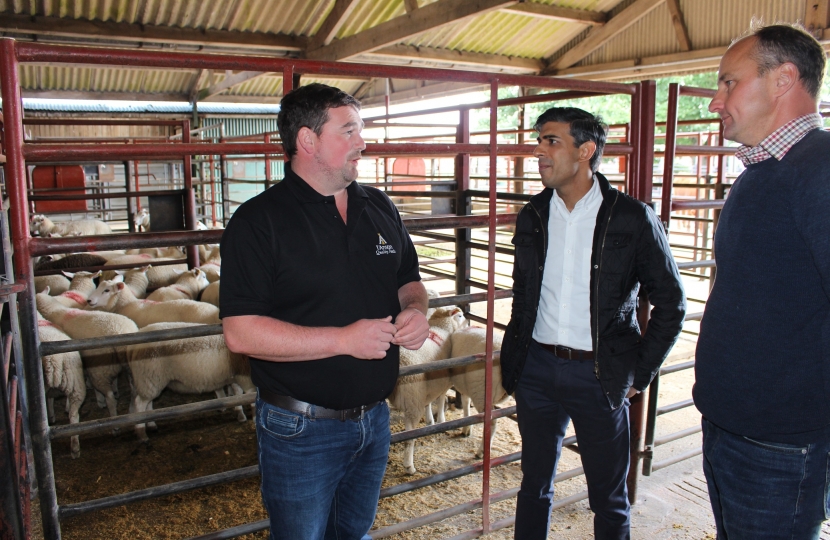 He talked to a group in the mart canteeen and viewed the day’s sales with NFU representatives Richard Lambert and Stephen Dixon.

Mr Lambert and Mr Dixon, respectively chair and vice-chair of the Leyburn and Dales branch, discussed stock prices, the transition period for farm support payments, how to attract young people to the industry, foreign trade deals and the potential in UK and overseas markets for locally-branded lamb and beef.

Mr Lambert, who has 1,000 sheep, mostly Swaledales, at Braidley Hall Farm, Coverdale, said Rishi was fully aware of the issues at stake in striking new trade deals around the world.

“We also talked about the enormous untapped potential for premium UK meat in Asia markets and how they could be developed.”

Mr Dixon, who farms 2,000 sheep and 140 suckler cows at Stainton Manor Farm, Downholme near Richmond, said: “We agreed that there is a need to make the best of the quality of the Swaledale sheep we produce here and how as a breed it is uniquely adapted to the Dales landscape. That combination has a value which we should exploit.”

Rishi, who watched a sale of calves in the main ring, said it was good to hear farmers’ current perspectives about the industry.

He said: “There are many changes ahead but it was encouraging to hear how prices for both lamb and beef have hardened over the last year or so. Consumers are definitely more aware of the importance of provenance and the high quality meat produced by farmers across the UK but particularly here in North Yorkshire.

“That growing desire to know where the meat we buy comes from and is produced to the highest standards can only be good news for our farmers.”