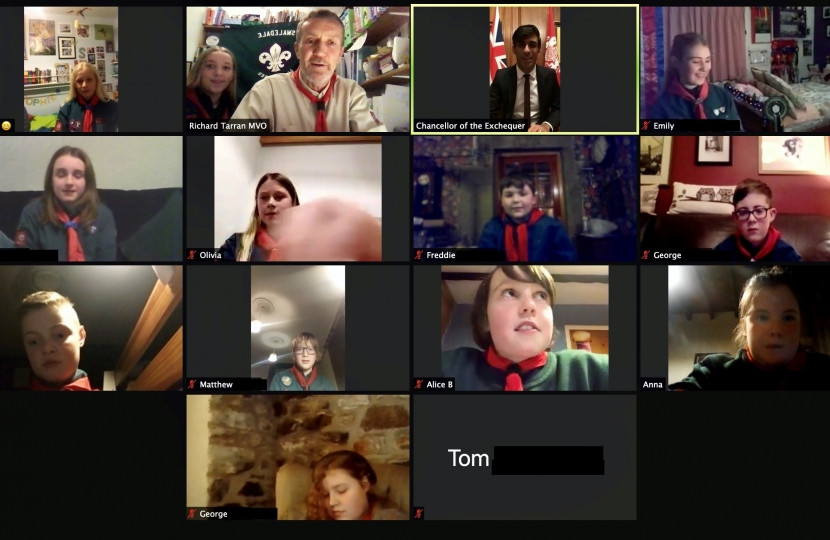 Rishi joined a meeting of Swaledale Scouts from his office in Downing Street.

The MP joined one of the group’s regular meetings from No 11 via Zoom video conference.

Rishi fielded questions from the scouts about the Covid-19 pandemic, the impact of flooding on the Dales and the sustainability of moorland economies.

He also heard how the group had remained engaged through the pandemic, meeting via Zoom and socially distanced in person in September.

During that time the group had built a huge representation of the Scout movement’s fleur-de-lis logo in stone on a hillside near Surrender Bridge between Swaledale and Arkengarthdale.

An aerial view of the completed logo was shared during the meeting which Rishi said was most impressive.

He said: “I very much enjoyed joining the meeting to hear how busy they had been despite the restrictions on their activities.

“They asked me some really good questions about the national and local issues that mattered to them.”

Richard Tarran, Swaledale Scout Leader, said he was grateful to Rishi for taking the time to join the meeting.

He said: “The number one thing the Scouts talked about afterwards was his enthusiasm and the fact that he had taken the time to talk to them as well as answering their questions in a thoughtful and understandable way.”