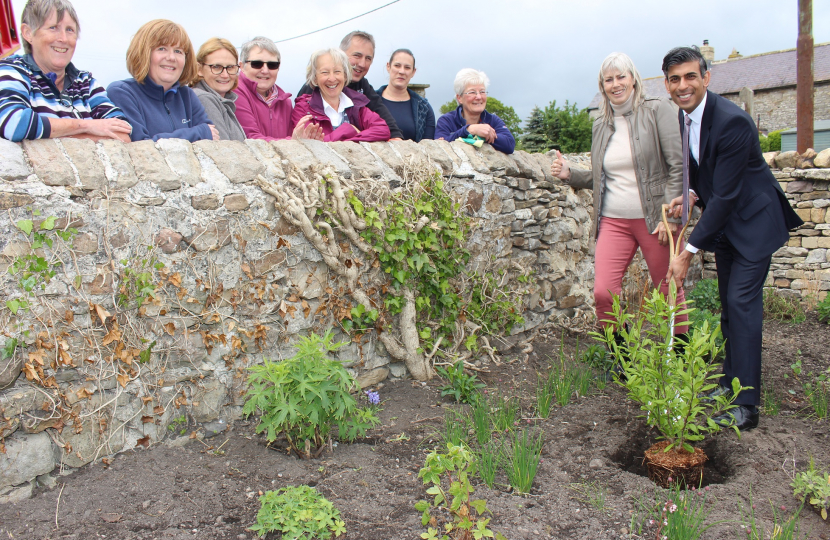 A garden created to benefit a whole village is taking shape in the Yorkshire Dales.

Bellerby Community Garden is being built in the village near Leyburn.

Work started on the garden – just a disused allotment in 2018 – after Bellerby Parish Council decided it should be used for community benefit.

A nine-strong steering group of villagers got to work clearing the site in Church Street which was completely overgrown.

Amidst the debris the group cleared was a shed which steering group member Steve Singleton described as looking like “a hand grenade had exploded inside.”

Cllr Sedgwick’s grant of £5,000 from her county council locality budget plus a number of other grants and donations from local businesses and individuals funded a substantial greenhouse.

Work is now underway on creating a series of raised beds. A central feature will be a bed created within a circular stone wall by a member of the steering group, Robin Turton, a professional dry stone waller.

Mr Singleton said: “We are very grateful for all the donations, grants and contributions we have received and the hard work by members of the steering group and villagers who joined us for particular projects when we needed additional assistance.”

Mr Singleton said the group was particularly grateful to David Metcalfe of Metcalfe Farms for the donation of stone and Nigel Murphy for the gift of a replacement shed.

He said the garden would be largely finished next year and a decision had been taken to invite village organisations to take on a bed and to look after it as they saw fit. Villagers would be invited to be active gardeners or simply to enjoy the work of others.

Cllr Karin Sedgwick said: “I was really happy to support this project. It is a wonderful community project that has brought businesses and people together.”

After being shown round the garden by members of the steering group, Rishi planted a magnolia in one of the beds.

He said he was very impressed by the vision the group had for the plot.

“Although incomplete, you can see what a fabulous space this will be for both villagers and visitors to the area when it is finished,” he said. “It is a tremendous example of what a community can achieve when so many businesses, organisations and villagers get behind an idea.”