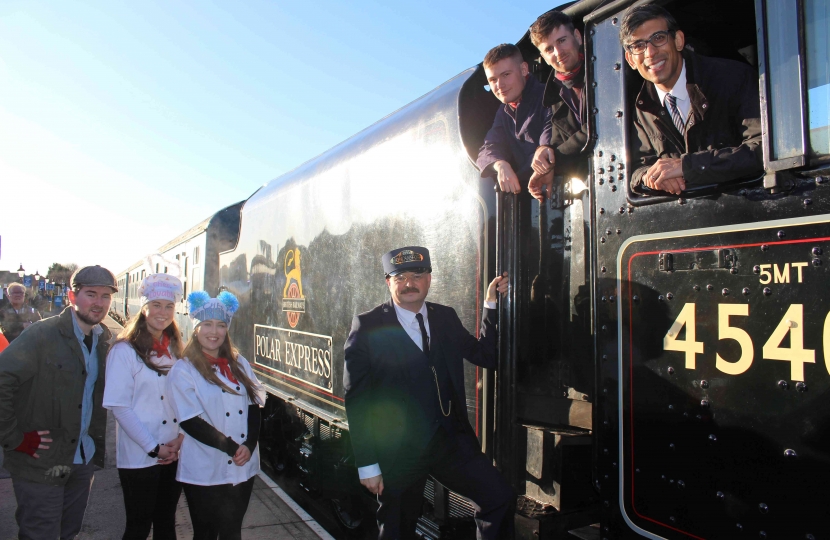 Rishi has welcomed the ‘phenomenal success’ of a festive tourist attraction which has brought thousands of families to North Yorkshire.

Rishi visited the Wensleydale Railway’s Leeming Bar Station to see the Polar Express before it set off on one of its packed journeys up the heritage railway line.

The Polar Express is a festive family attraction based upon the hit Christmas movie. Families are taken to the North Pole on a steam-hauled train to see Santa, meeting characters from the film along the way.

The car park at Leeming Bar Station has been transformed into a tented Polar Express-themed hospitality and shop area.

Rishi was told that the Wensleydale Railway Polar Express was sold out early in September with more than 45,000 tickets sold for the five-week period the special services were running. It is the most successful Polar Express train experience in the UK.

After meeting staff and railway volunteers preparing the train for its journey up the line, Rishi said: “This is a great experience for families and its popularity is a huge boost for the railway and the local area.

“Visitors are coming here from all over the North of England and Scotland to experience the event, patronising local hotels, shops, pubs and restaurants.

“It is a great boost for the area as well as the railway which has reduced revenue during the winter months.”

Guy Loveridge, chair of the Wensleydale Railway plc, said it had been a pleasure to welcome Rishi to see the phenomenal success of this year’s Polar Express.

He added: “A year ago Rishi came to the railway when we were at our lowest point at the height of the pandemic. The Polar Express couldn’t run and Leeming Bar Station was still a building site.

“So it was a joy for us to welcome him back to see the completed refurbishment and to have a taste of the Polar Express experience. It also enabled us to thank him for the £135,000 of Government Covid support the railway received during the pandemic and sustained the business through to better times.”

The Polar Express will return to the Wensleydale Railway next year.