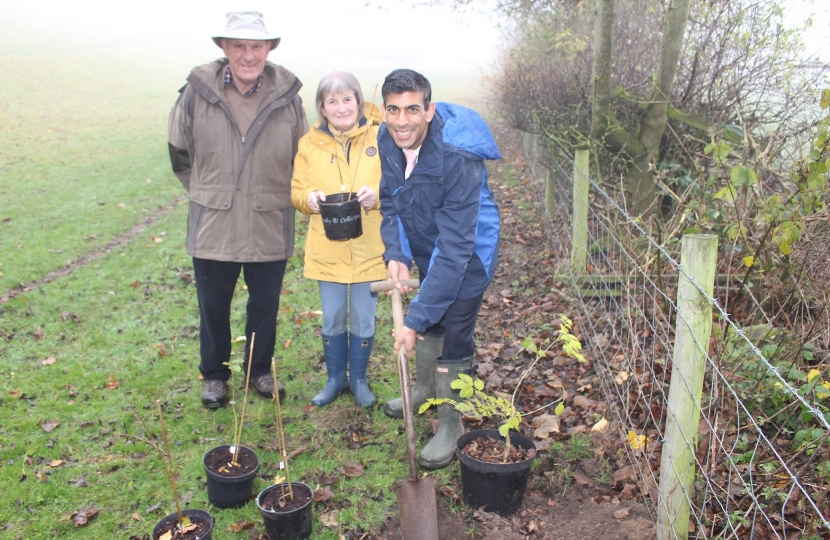 Rishi Sunak chose Richmond to be the home for five trees given to him to mark Her Majesty The Queen’s service to the Commonwealth.

Mr Sunak was one of more than 500 other MPs given trees to plant as part of the Queen’s Commonwealth Canopy, a network of forest conservation initiatives to mark the Queen’s lifetime of service.

The Richmond MP decided to present the trees to the Richmondshire Landscape Trust, a community land charity of which he is a life member.

The tree saplings – two silver birch, two rowan, and a hazel – were planted at Sleegill Hillside in the shadow of Richmond Castle, one of five parcels of land around the town looked after by the Trust.

The MP was assisted by two trustees – Jacqui Singleton-Turner and John Blackburn  – who also took the opportunity to show the MP some of the Trust’s other open spaces which total 96 acres.

Mr Sunak said: “As a life member of the Richmondshire Landscape Trust I was delighted to present the trees to the town and the trust which does an amazing job of maintaining these precious open spaces.

“The work of the Trust’s volunteers in looking after this land and making sure local people have easy and safe access to it is exceptional.”

The Trust was formed in 2004 when a fundraising campaign (the Richmondshire Open Spaces Appeal) began to buy some key open spaces from Richmondshire District Council. Since then, the Trust has maintained and enhanced the landscape – rebuilding stone walls, planting hedgerows, and creating wild flower meadows.

The five trees were donated to Mr Sunak thanks to a partnership between the Woodland Trust, Sainsbury’s and ITV, which in April screened a landmark documentary, The Queen's Green Planet, following Her Majesty the Queen and this ambitious legacy project which brings together her deeply held commitment to the Commonwealth and her little-known love of trees.

At the heart of the film was a conversation between the Queen and Sir David Attenborough filmed in the gardens of Buckingham Palace last summer.  In a rare opportunity to see the Queen talking informally to Sir David, the conversation ranged from climate change, to conkers and of course trees.

In support of the programme the Woodland Trust provided 50,000 trees for ITV viewers, and via Frank Field MP, who conceived the QCC initiative, also offered a special commemorative pack to every MP in the UK.