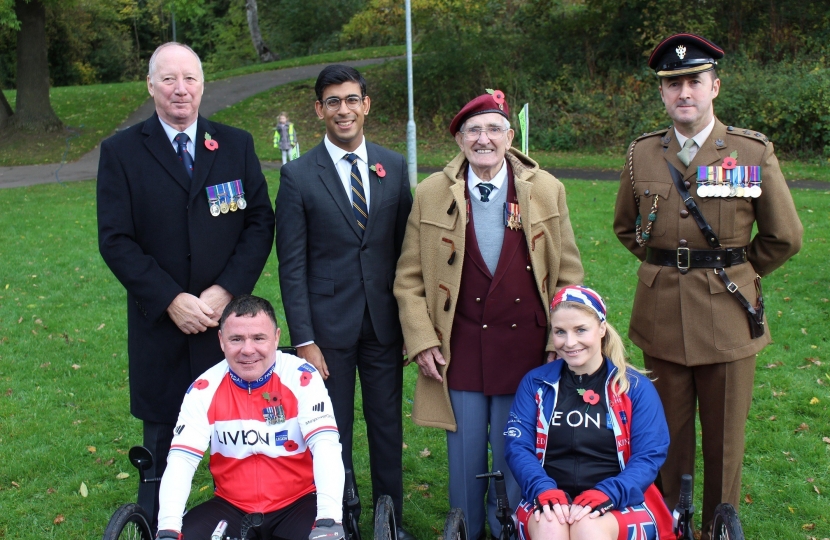 The Royal British Legion’s annual Poppy Appeal was launched in Catterick Garrison with the backing of Richmond MP Rishi Sunak.

Mr Sunak was among the guests of honour to be presented with poppies to mark the start of the Remembrance period when the Legion sells the traditional red poppies to raise funds for the Armed Forces community.

During the short ceremony during which The Last Post and Reveille was sounded, members of the Catterick Army Cadet Force presented the poppies to the official guests and veterans.

This year, the Royal British Legion is asking the nation to “Rethink Remembrance” by recognising the sacrifices made not just by the Armed Forces of the past, but by today’s generation too.

For many, Remembrance is associated with the fallen of the First and Second World Wars. While the Legion says we will always remember them, it wants to raise awareness of a new generation of veterans and Service personnel that need our support.

Among the guests of honour at the Catterick event in Coronation Park was former RAF medic Anna Pollock who has been selected to be one of the faces of this year’s Poppy Appeal across the country.

The 34-year-old, who lives in Catterick, joined up in 2000 and completed a tour of Iraq.

This restricted her ability to walk and has left her heavily reliant on a wheelchair.

Mr Sunak said: “It was an honour to be present at this moving ceremony to launch this year’s Poppy Appeal and to do so at Catterick Garrison.

“The Legion does a tremendous job every year in organising the appeal and making sure we never forget the sacrifices made by so many men and women for the freedom we enjoy today.”

To mark the launch, volunteers decorated the  Camp Centre roundabout with poppies – some of which had been hand knitted by members of the public.

Sue Oddy, community fundraiser for the appeal who helped organise the event, said: “There was a great turnout and I’d like to thank everyone for their support.”