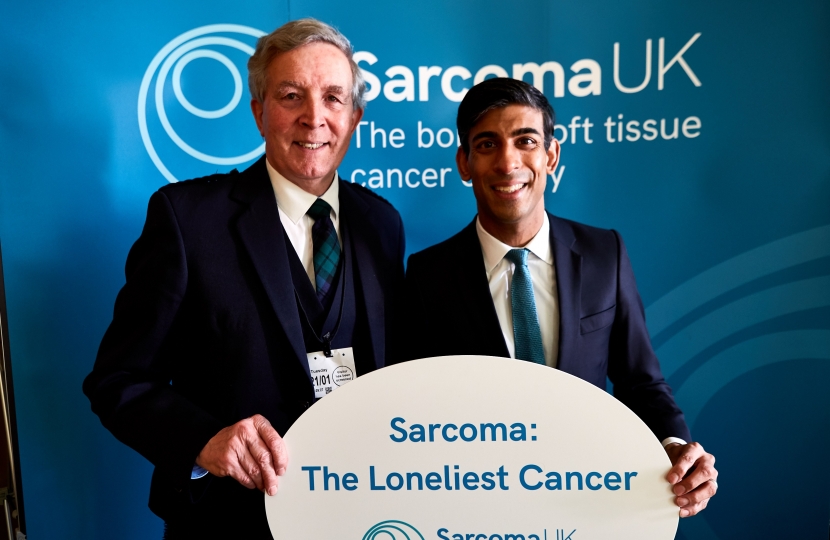 Rishi Sunak has decribed his meeting with a Richmond cancer survivor as inspirational.

Mr Young told the MP about his successful treatment for a form of cancer which is less understood than many more common cancers.

Mr Young was diagnosed with liposarcoma in 2016 and following surgery and radiotherapy is now active and in remission.

Incredibly, this year he completed his 12th Great North Run at the age of 74, raising funds and awareness for the national bone and soft tissue cancer charity, Sarcoma UK.

He said: “It was fantastic to be part of this event and speak to Rishi as well as MPs from around the UK about the importance of raising sarcoma’s profile.

“I know first hand that sarcoma can be a terrible and lonely cancer so it’s not surprising that only 25 per cent of people know what sarcoma is.

Mr Sunak said he found Mr Young’s story of how he overcame his cancer inspirational.

“I was very impressed by John’s attitude and his commitment to get the message about sarcoma across and what needs to be done to improve awareness and treatment.”

Sarcoma UK’s latest report, The Loneliest Cancer, provides an assessment of the current provision for sarcoma care in the UK and reveals how sarcoma and a general lack of awareness of the cancer can have a devastating impact on those affected by it.

Initial diagnosis is often inaccurate and compared to other more common cancers, fewer treatment options are available. This means that currently only 55 per cent of sarcoma patients live beyond five years.