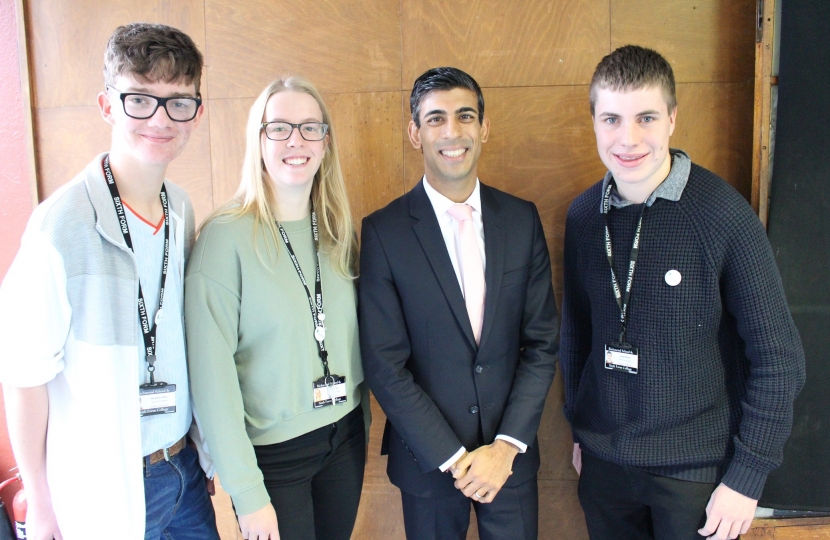 Rishi Sunak took part in Parliament Week at Richmond School and Sixth Form College - and contributed to a debate about lowering the voting age.

A student referendum held during the week delivered a surprising result - the students voted against lowering the voting age from 18 to 16.

During the visit Mr Sunak, MP for Richmond, was involved in lively debates with sixth form students on a variety of subjects from Brexit through to populism. On the voting age he pointed out that at the last general election only 50 per cent of the 18-25 year old group used their vote.  His view was that greater attention should be focused on encouraging younger age groups to vote before considering lowering the age limit.

Earlier in the week Baroness Harris of Richmond had spoke to students about her role in the House of Lords.

Rishi Sunak said: “I very much enjoyed my visit during Parliament Week and to have the opportunity to talk to the students about the importance of democracy and the role they should play once they have the chance to vote. I was mightily impressed by the questions posed by the sixth-formers, many of whom are clearly very interested in politics. They asked me exactly the sort of probing questions I would have expected to be asked if I was being quizzed by one of the country’s top political journalists.”

Clare Clish, lead teacher of Business and Economics, said: "It was fantastic to see how readily all of our students engaged with the activities taking place throughout Parliament week.  From posing challenging questions to both Baroness Harris and Rishi Sunak MP, to participating in the following mock referendum, it has been clear how interested in politics and the democratic process our students are.  We're very grateful to our visitors for giving up their time to provide students with an invaluable first-hand account of life in both the House of Commons and the House of Lords”.

Ben Clarke, headboy, said: "Parliament Week was a great success. It was a busy week for the Government, which provided a lot of ammunition for questions put to Rishi Sunak MP when he gave students a talk.  I was surprised by the referendum result, especially as the older students voted not to lower the voting age."

Parliament Week is an annual event designed to engage people, especially the young, with Parliament and encourages them to get involved in the democratic process