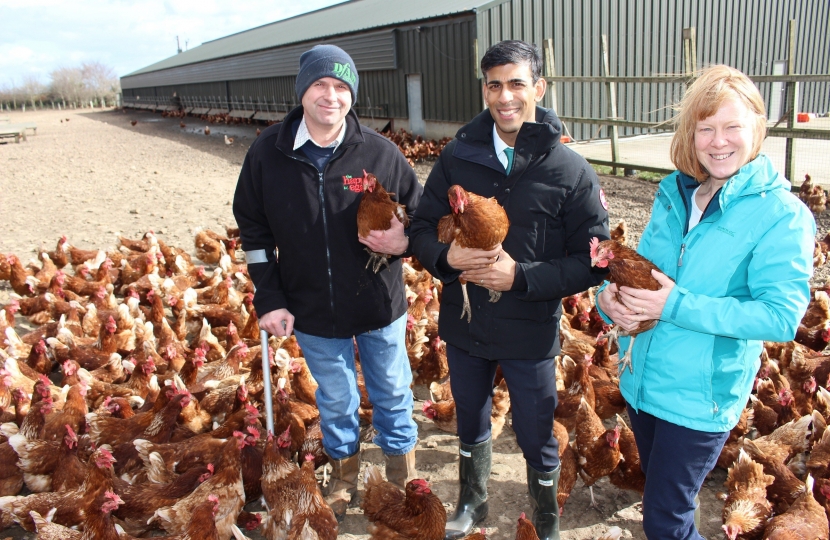 A North Yorkshire egg producer has spoken of the benefits of being part of a producer group which rewards high standards with premium payments.

Nigel and Sue Smith have a flock of 16,000 free range hens at Stonecote Farm, Arrathorne, near Bedale, and have been part of the Co-op’s Egg Producer Group, set up with Noble Foods, since 2016.

During a visit to the farm by Richmond MP Rishi Sunak, Mr Smith spoke of the benefits of being part of the group which is made up of six farms across the North of England – three of them in North Yorkshire.

He said: “Being part of the group has been good for us. We are very closely audited to ensure we meet the highest welfare and quality standards and in return we receive a premium payment for our eggs.

“We also receive support to help us go further and the Co-op also encourages us to work with our local communities, particularly children, to help them understand where their eggs come from and that they are produced in a sustainable and welfare-friendly way.”

The Smiths’ hens have freedom to roam around their roosting/perching and laying shed and the extensive farmland outside. They are also provided with ‘toys’ – brightly-coloured plastic objects – to play with.

Each hen lays on average 340 eggs during their lifespan. The majority of Smith’s eggs are sold under the Happy Egg or Co-op own-label brands.

Mr Smith said the regime under which the hens were reared discouraged the use of antibiotics to treat any illness that might occur in the flock.

Mr Sunak said he was hugely impressed by the Smiths’ operation.

“They clearly care deeply about the quality of life for their flock which means happy hens and high quality production.

“It was very good to see the benefits of being part of a producer organisation which delivers for the customer in terms of quality and traceability and for the producer in terms of support and price.”

Last year the Smiths’ farm was recognised in the British Free Range Egg Producers Awards when the couple were declared Producers of the Year in the 16,000 hens and under category. Judges were impressed by their bio-security and above breed target production.