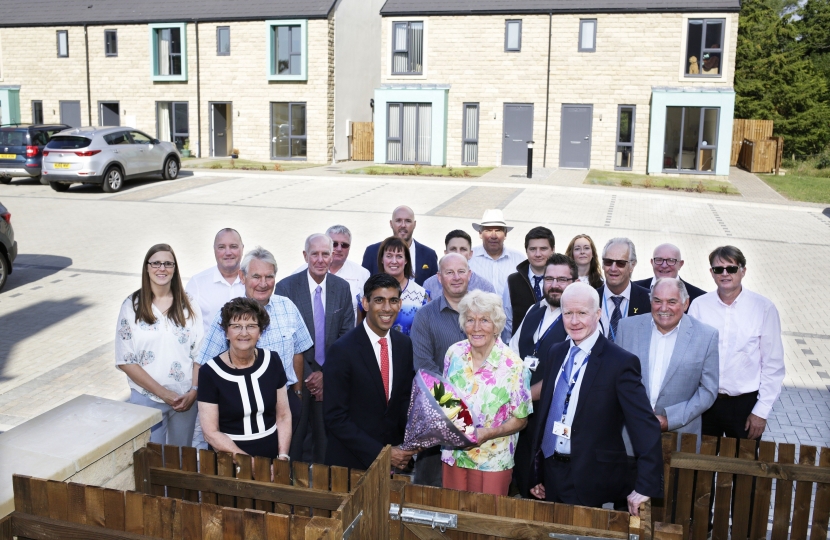 A £1.6 million affordable housing scheme which has provided homes for people with a connection to a small Richmondshire village has been officially opened.

Rishi Sunak MP was among the guests at the opening of Broadacres’ 11-home scheme in Gilling West, near Richmond.

The development, at Oswin Grove, consists of five three-bedroom homes and six two-bedroom homes. It was built on the site of a former sheltered housing scheme in the centre of the village.

Ten of the homes are available for rent and one on a shared ownership basis.

All 11 homes have been allocated to people with a connection to Gilling West, either because they were already living elsewhere in the village, or work in the surrounding area. This is to ensure village communities remain sustainable for local people.

Speaking at the opening, Rishi Sunak said: “This is just the sort of development we need to meet the demand for affordable housing and I’m delighted that this is the second such scheme I’ve been asked to open in recent months. Finding the appropriate sites in rural areas and developing them is challenging so I congratulate all the parties involved in making this happen.”

Broadacres’ Chairman Colin Wilkie said: “This development would not have been possible without the support of Richmondshire District Council who gifted us the land, Homes England who provided some of the funding and members of the community who, during the initial consultation process, expressed a desire for more family homes in the village.

“Schemes like this are fundamentally important because they help us to meet the demand for high quality housing from local people who, understandably, want to remain in their community.”

The total cost of the development is £1.64 million, which included a grant of £352,000 from Homes England, the Government body responsible for delivering new homes.

The homes have been built around a courtyard and as well as their own gardens and car parking, residents also have access to a communal gazebo area. Broadacres has also provided dedicated car parking spaces for the bungalows that face the development, as residents in these bungalows previously did not have their own parking.