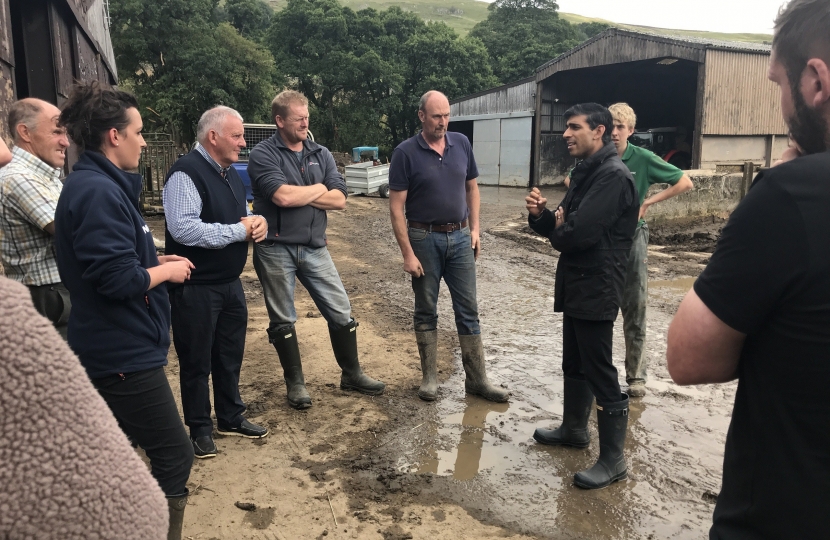 He is seeking to secure funds to cover the costs of rebuilding roads and bridges, to clear debris from choked becks, and for farmers to meet the costs of repairing walls and buildings, and disposing of dead stock and contaminated feed.

Mr Sunak has also re-located his Westminster office staff to the constituency to help individual constituents with their queries and provide support on specific issues like insurance.

He has also been in touch with two charities who have emergency grants available.

The Two Ridings Community Foundation is offering grants to affected residents (up to £300 available immediately) and RABI (The Royal Agricultural Benevolent Institution) has emergency grants for farmers affected.

RABI welfare officer John Basnett will be at Leyburn Auction Mart at noon on Wednesday (August 7) with streamlined forms for affected farmers to submit claims for assistance.

A meeting of the local authorities and the Environment Agency this morning convened by Mr Sunak focussed on the problem at Grinton Beck where debris brought down by the flash-flooding has obstructed the beck. Some properties have been flooded a second time.

A plan has been agreed between the parties to start work as soon as possible to clear the debris.

Mr Sunak welcomed the start of work today by North Yorkshire County Council on a temporary bridge at Grinton Moor and the landslip on the B6270 at Cogden. These should be completed in a matter of weeks so restoring vital connections between Swaledale and Richmond/Leyburn.

Mr Sunak said: “In the two days I have spent in the affected areas, the spirit shown by people has been remarkable and humbling to witness. Many individual stories are truly heartbreaking.

“The local authorities and many volunteers who have come forward are now working well together and deserve our praise and thanks.

“I’m working to back that tremendous effort up with support from central government and making sure that all the agencies work together effectively.”