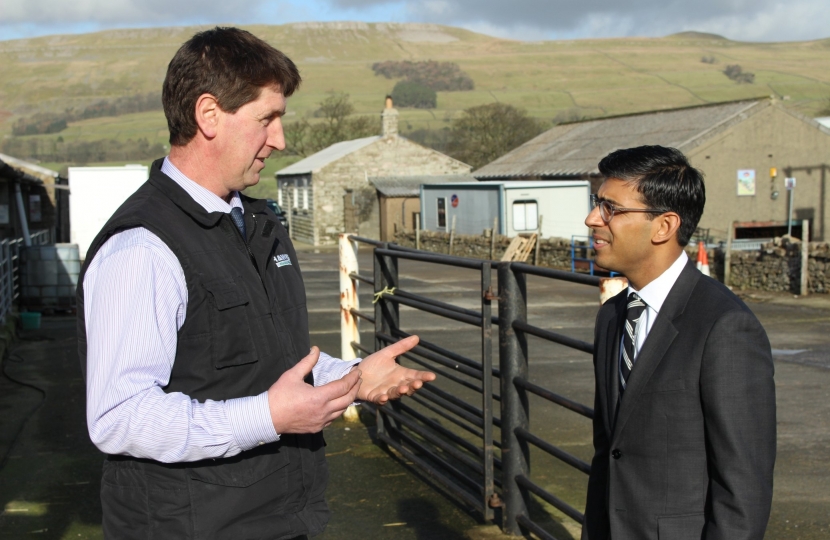 RICHMOND MP Rishi Sunak has written to the Government about "eye-watering" increases in business rates faced by auction marts.

The livestock markets at Hawes, Leyburn and Northallerton are facing increases of up to 270 per cent following one of the regular reviews of the rating system.

Mr Sunak has written to the Leader of the House of Commons, David Liddington, after raising the issue in the chamber last week and visiting Hawes mart at the weekend.

He said: "While the majority of businesses will pay the same or less in rates following the revaluation, it is clear a small number of rural businesses are being asked to carry a disproportionate burden.

Mr Sunak said the businesses affected would benefit from a transitional rate relief scheme worth £3.6bn which would limit increases in the first year to no more than 12.5 per cent but the relief tapered off over five years.

At the end of that five-year cushion, Hawes could be expected to pay about 270 per more, Northallerton 145 per cent more and Leyburn 92 per cent more.

He said: "These businesses are not making huge profits and such increases will be very difficult to absorb."

He said that having seen the mart's income and expenses for the last seven years it was clear that while turnover had increased a lot, and had clearly been a factor in the revaluation, so had its costs so profitability had remained flat.

Mr Sunak said: “Rural businesses appear to be shouldering an unfair burden in this process,” he added. "It is unreasonable that critical businesses in some of most economically fragile areas, which might be only marginally profitable, should face dramatic increases in their rates."

Mr Sunak said his letter to Mr Liddington urged the Government and the Valuation Office Agency, which carries out the revaluations, to take greater account of a business' actual profits rather the turnover and its profit potential.

He also raised the issue of equestrian centres and livery yards which are also facing steep increases, if not on the same scale as the auction marts.

The review of business rates will mean the majority of enterprises in the UK will pay the same or less and 600,000 will pay no rates at all.

Other than London, all English regions will see a decrease in bills overall. London stands to see the largest rise in rateable values, and rates bills, as a result of the 2017 revaluation.