Rishi visits ‘inspirational’ community which stepped up during the pandemic 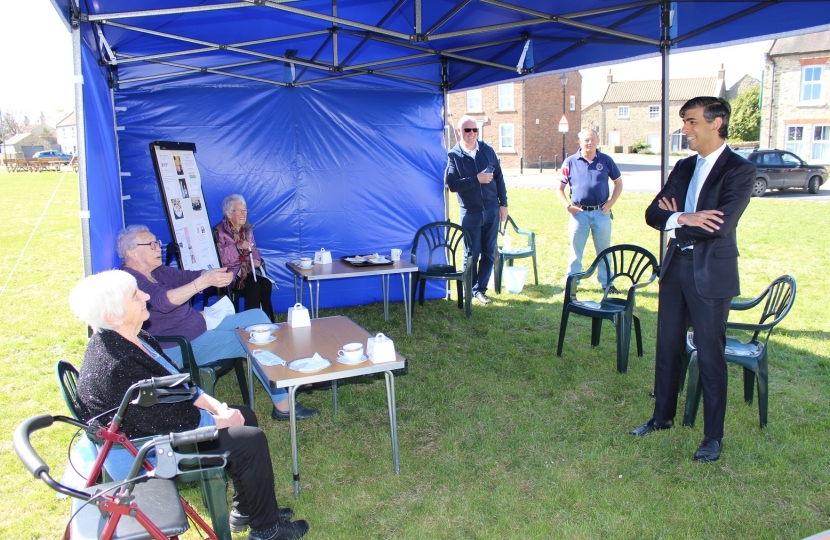 Rishi has praised a rural community for its “innovation, inspiration and hard work” in caring for the elderly and vulnerable during the Covid 19 pandemic.

The MP said he had been tremendously impressed by the way the village had come together in so many different ways to help those most at risk during the last year.

He visited Scorton, a village between Northallerton and Richmond, to meet Ian Robinson, the founder and coordinator of the Scorton Community Buddies organisation, along with a group of volunteers and residents and other community groups who had worked together so effectively.

Set up in 2014 as a village be-friending scheme to supporting the elderly, vulnerable and lonely residents within the community, the Buddies quickly adapted when the social activities they usually organised were not possible.

They have prepared and delivered an average of 35 afternoon teas and lunches each month to their members, plus festive hampers in December.

Working with the Scorton Covid-19 support group and the village shop they also assisted with shopping collection, doorstep deliveries and general support for those who needed it.

Funded by grants and last year by the Co-op Local Community Fund, the group has also been assisted by donations received from the Scorton Bus Shelter Buddies.

This initiative was started by villager Linda Hutchinson. The bus shelter in the centre of the village was used as a book recycling centre and expanded to cover toys, jigsaws, DVDs, plants and home baking during lockdown.

One villager, Roy Hendry, made a total of 52  bird boxes to sell  and raise funds for the project

The bus shelter project has proved so popular donations have raised more than £7,700, some of which has funded the work of the Community Buddies.

Rishi said the “innovation, inspiration and hard work” of so many Scorton villagers had been very impressive.

He added: “Many communities have responded magnificently during the crisis and Scorton is no exception to that. The way they have worked together to make sure everyone in their community who needed help received it has been quite remarkable. They deserve a huge amount of credit and thanks.”

During his visit, Rishi met many of the villagers involved, including Helen Newall and village store owners Shailendra and Versha Soti, who were instrumental in setting up the Scorton Covid 19 support group and Natalie Normanton and Bryan MacKinnon at the Farmers Arms who have supported the Buddies group during the pandemic.

He spent time with a group of elderly residents who are members of the Community Buddies scheme who gathered in a gazebo on the green for tea and cake - their first social gathering in over year, enjoying the fresh air and sunshine.

Ian Robinson said they planned to increase the number of outside gatherings as Covid restrictions were relaxed and looked forward to holding a very special party when it was safe to do so.

He said: “Scorton is a great example of a caring community. We have all pulled together during this difficult period to make things better for those who need help most. I am very proud of our achievements and pleased our work has been positively acknowledged by Rishi.”