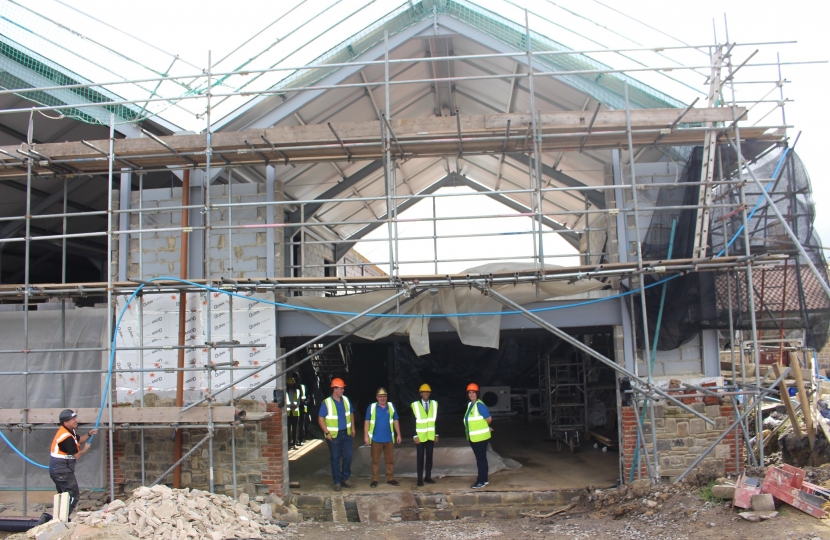 One of the UK’s most successful farmshop enterprises is continuing to build its business – with Rishi's backing.

Work is nearing completion on Mainsgill Farm Shop’s 15,000 sq ft extension to its premises beside the A66 near Richmond and Rishi recently visited to see progress on what he described as “hugely-impressive” expansion project.

During his visit, he spoke to customers and staff and saw the new two-storey structure taking shape.

The extension will house additional retail space, a gallery to exhibit local arts and crafts and the extra space will enable the café kitchens and food preparation area to be extended.

Up to 20 more people will employed on top of the 60 existing staff and the business is recruiting now.

Although work on the project was interrupted by Covid-19 restrictions, owners Andrew and Maria Henshaw and family hope to have the extension open by the middle of next month as the run-up to Christmas begins.

Rishi said the Mainsgill expansion was “a very important development” in the north Richmondshire area.

He added: “It’s very encouraging to see this hugely-impressive investment in the rural economy in challenging times. Mainsgill has set the standard for farmshops over almost 20 years and this will take what was in the beginning a farm diversification project to the next level.

“It is a tremendous family business employing more local people, showcasing the wonderful local produce we have here in the Richmond and North Yorkshire area.”

Mainsgill Farm was purchased by the Henshaws in 1995, with the first purpose-built farmshop building opening in 2001 at a time when the farming industry was reeling from an outbreak of foot-and-mouth disease and, before that, BSE.

There has followed a series of expansions and extensions with the addition of the teashop/café, butchery and the granary retail area.

Andrew Henshaw said: “To have Rishi visit us and to see what we are doing here has giving us and all the staff a tremendous boost.

“This is a big step for Mainsgill but we are confident in the future. Our customers have been amazingly loyal to us, not just this year during the pandemic but over the years we have been growing the business.

“We are very keen to use the extension to show the people travelling through the area on the A66 the excellent produce we have in Richmondshire. That’s not just the meat we rear here at Mainsgill but the whole range of good things produced in the area – food and non-food.”

Mr Henshaw said he saw the upgrading of the A66 to dual carriageway – with the new road built to the north of the farm and existing single-carriageway – as an opportunity.

Highways England had been very helpful in providing information and consulting affected businesses about the £1bn project to dual the entire route from the A1(M) at Scotch Corner to the M6 at Penrith.