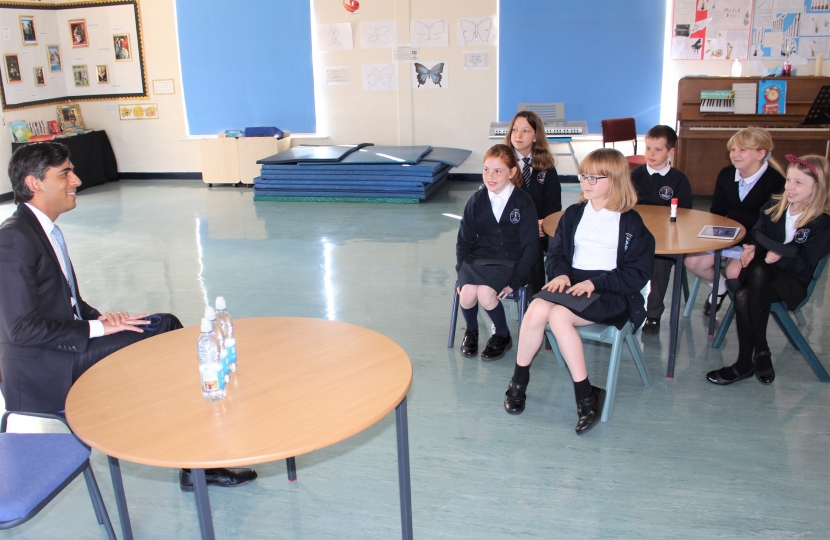 School journalists put Rishi on the spot with questions about his life in Westminster and why he became an MP.

Rishi was invited to Crakehall Church of England Primary School, near Bedale, by the school’s Kidz News team.

The team produces a fortnightly newsletter in their own time and secured an exclusive interview during Rishi’s visit to the school.

The young reporters asked Rishi a range of questions including why he became an MP and for advice based on his own experience of primary school.

Rishi said he was inspired to become an MP by the example set by his parents when he was growing up. His father was a GP and his mother a pharmacist and he also wanted to serve his community.

His advice to the children was to read as much and as widely as they could, recommending his favourite children’s author Roald Dahl. He also urged them to take every opportunity to try new experiences as a way of finding out what they wanted to do when they grew up.

During his time at the school, Rishi took part in a further Q&A session with key Stage 2 pupils and then joined pupils taking part in the school’s Growing Together project.

They planted sunflowers together for the project which is run with the Yorkshire-based charity The Friends of Mettupalayam Trust, a charity which aids rural development in a part of southern India.

He also joined Early Years Foundation stage children in the Forest School, an initiative the school launched several years ago to encourage learning about the outdoors.

The children were gathered round a camp fire learning about fire skills and safety.

Rishi said he very much enjoyed his visit to a clearly excellent school.

He said: “The news team had some great questions for me and I look forward to seeing the finished newsletter.

“I was very impressed with the learning taking place in the school’s grounds which focused the pupils’ attention on the world around them – both in Crakehall and much further afield.”

Headteacher Mrs Sam Marino said: “It was been a wonderful experience for all our children, Mr Sunak was extremely inspiring and engaging through-out his visit. It was a pleasure to watch the children ask thought-provoking questions to gain a better understanding about our world, two key elements of our school vision. I'd like to thank our Kidz News team for organising the event, I am extremely proud of them all.”