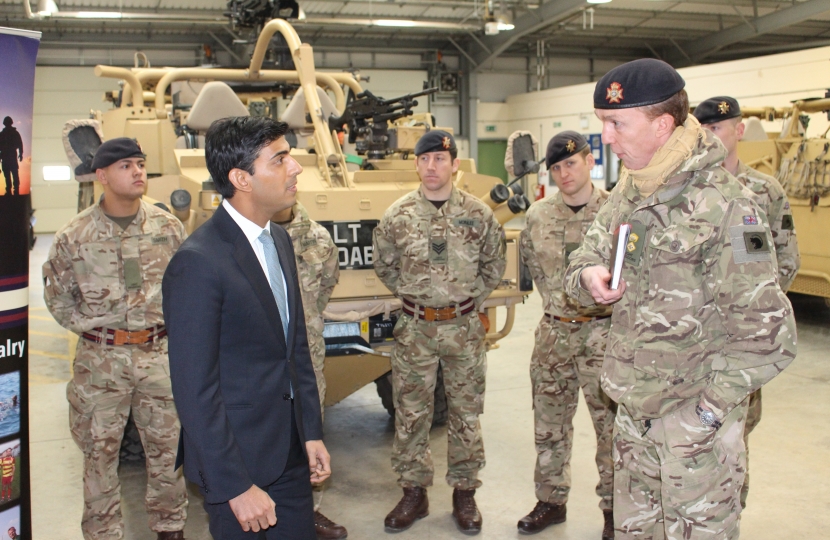 Mr Sunak spoke to the members of the Light Dragoons who cut short their Christmas break to help the thousands of people in West Yorkshire hit by the widespread flooding on Boxing Day.

The soldiers were recalled from leave the day after Boxing Day and within hours were deployed to the Calder Valley in West Yorkshire where they helped stricken families with clear-up operations.

They were also involved in an urgent but successful operation to protect an emergency services communication mast near Wakefield from the flood waters. One mast in York had already been put out of action by flooding.

They filled and stacked hundreds of sandbags to keep the rising waters at bay.

Capt Luke Doddington said it had been a positive experience for his men. “Our work was well received by the people of West Yorkshire. It was very challenging at times but the men were pleased to do their bit.

“What happened in the Calder Valley was unprecedented. The volume of water that came through the towns of Mytholmroyd and Hebden Bridge was previously unknown. It was, in effect, a tidal wave.”

Mr Sunak, who spent a morning with the men at their Gaza Baracks base, said he was very impressed by what the Light Dragoons along with the other Catterick-based units and the emergency services had achieved.

He said: “They demonstrated great commitment to leave their loved ones to help others facing the terrible trauma of being flooded out of their homes at Christmas.”

“It is testament to the tremendous skills and adaptability of the British Army that it was able to provide this sort of practical assistance to people in desperate straits almost at the drop of a hat.