Voting Conservative is the only way out of this impasse 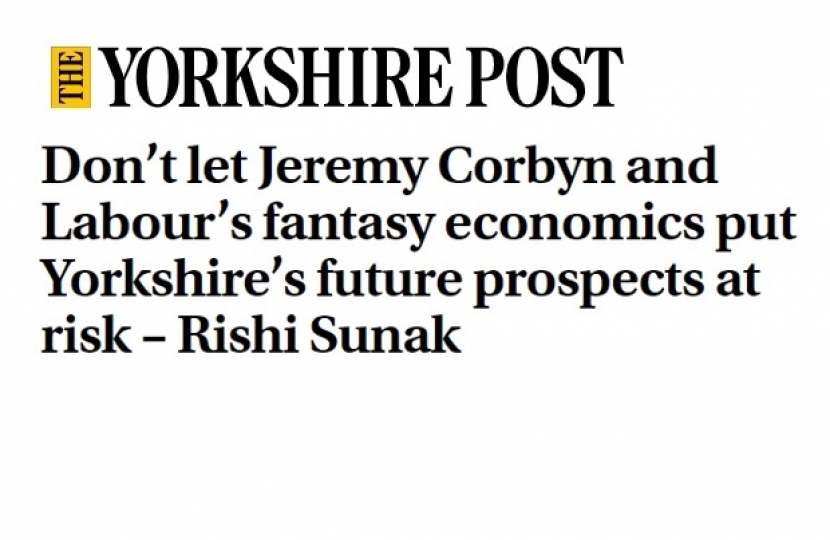 FOR the last four years, I have had the privilege of representing Richmond in the House of Commons. Being an MP – being given the chance to serve – is the honour of a lifetime.

You, the voters, send us, the politicians, to Westminster to deliver your instructions. Which is why it has been so frustrating to witness parliament fail spectacularly to respect the result of the 2016 EU referendum.

MPs have refused to honour that vote, despite the Prime Minister’s extraordinary efforts to secure a new deal which takes back control of our laws, borders and money. Parliament declined to pass that deal, opting instead for yet more delay.

But it is not just Brexit which is at stake on December 12. It’s also the future of our economy. When the Conservatives came to office in 2010, we inherited an economy devastated after 13 years of a Labour government. Their over-borrowing and over-spending left our economy critically exposed when the financial crisis hit. And it was hard-working families in Yorkshire, and across the country, who paid the price in lost jobs and higher taxes.

It took a Conservative government to turn the ship around. The immediate priority had to be to reduce the deficit which had spiralled dangerously out of control. After a decade of tough decisions and hard work by the British people, the deficit has been cut by four fifths and debt is finally falling as a share of our economy. We have had nine consecutive years of economic growth, with an average of 1,000 jobs created every single day.

The benefits have been felt right here in Yorkshire. Since 2010, unemployment in Yorkshire and the Humber has fallen by 56 per cent, tens of thousands of people have started apprenticeships, and there are now 96,200 more small businesses. More jobs, more skills and more enterprise – all thanks to the hard work and dedication of the people of this great county.

It’s because of the progress we have made together that the Government can now spend more on the public services people rely on. We are investing in 20,000 more police officers nationwide to fight crime and keep people safe. We are building 40 new hospitals and have a long term plan for the NHS to transform healthcare, including investment in Leeds and South Yorkshire. And we are increasing per pupil school funding so that every child has the opportunity of a great start in life.

In Yorkshire and the Humber that means we will increase funding to £5,000 for every secondary school pupil and £4,000 for every primary school pupil from 2021-22, providing a funding boost to hundreds of schools across the region. At the same time, we are helping people with the cost of living, by cutting taxes, freezing fuel duty and increasing the living wage to £10.50 an hour.

For too long, the north of England was overlooked by Westminster. So we will carry on supporting the Northern Powerhouse, delivering the critical infrastructure such as improved roads and railways which will spur Yorkshire’s growth in the decades to come.

We’ve also got to make sure rural areas get their fair share of investment. No home should be too remote for decent access to the internet, so I am delighted we are rolling out gigabit broadband to every home in the country by 2025. We’ll take full advantage of Brexit to replace the unfair, bureaucratic and environmentally-damaging Common Agricultural Policy with new better ways of supporting farmers, tailored to our own needs.

But Labour would put all these gains at risk. Their irresponsible approach to the public finances would cause the deficit to balloon once again. Their plans would mean raising taxes to the highest level in our peacetime history. And their policy to nationalise energy and water companies would cause household bills to soar. It’s a triple whammy which would clobber hard-working families.

The experience of the last decade has shown that the route to prosperity is through sound finances and creating a healthy environment for business. Yet Labour would ignore these lessons, splurging money we can’t afford and launching an assault on the very businesses which are the lifeblood of our economy. It’s fantasy economics with all too real consequences.

So the choice at this election could not be clearer. Get Brexit done, secure a strong economy and keep the cost of living down with the Conservatives. Or drag Brexit out, crash the economy and saddle the next generation with debt with Labour. I am confident the public will make the right choice. The future of Yorkshire and the whole country depends on it.